The world's only surviving narrow-gauge railroad, winds its way from the harbor at Porthmadog to the slate mining town of Blaenau Ffestiniog. Savour living history, traveling in monogrammed wooden carriages pulled along by 150-year-old steam locomotives as you look out at landscapes little changed for decades, lined with oak forests and majestic mountain scenery.

For many years the railroad flourished, however the slate industry fell into decline around the time of the First World War and passenger numbers also started to decrease. The railroad finally closed in 1946. Fortunately it did not remain closed for long: a group of railroad enthusiasts were determined the railroad should survive and after restoring the line to working order, it re-opened as a tourist attraction in 1954. Today the Ffestiniog Railroad offers passengers a fantastic journey through the wild and spectacular scenery of the Snowdonia National Park - a highlight of any visit to Wales.

The full route of the railroad is 13.5 miles long (20.7km) and runs from Porthmadog to Blaenau Ffestiniog.

Railroads and Castles of Wales 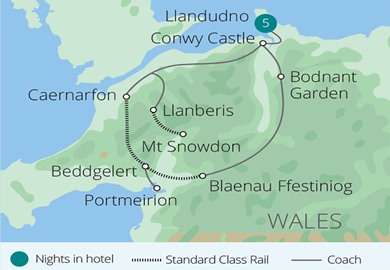 “The vacation was very enjoyable, hotel was fine. Our guide Elaine was very helpful and everything was well organised.
Collected by Trustpilot