Combining the magnificent cities of Salzburg and Vienna with some of Austria's most picturesque locales is the recipe for a truly wonderful tour. Add to this a scenic river cruise through the stunning Wachau Valley and a 'Sound of Music' tour, and you get an unforgettable Austrian vacation experience.

Day 1 - From London to Cologne

Meet your group and Tour Manager at our dedicated Departure Office at St Pancras International, and travel by Eurostar to Brussels on the first leg of our journey to Germany. We travel in Standard Premier Class, enjoying a light meal and drinks served at our seats during the journey. On arrival in the Belgian capital, our journey continues on the high-speed service to Cologne. Here we stay overnight at a centrally-located hotel, situated close to the city's railroad station, Old Town and its beautiful Gothic Cathedral.

Leaving Cologne behind, today we continue by high-speed rail to Austria. Our route takes us southwards across Germany and into the state of Bavaria. We continue across the Austrian border and travel through to Vienna, its ineffably elegant Baroque capital city. Upon arrival, we check into our hotel, the 4-Star Marriott Imperial Riding School Renaissance, where we stay for the next four-nights.

We begin our stay in Vienna with a tour of the city's main sights, taking in the magnificent Imperial architecture on the famous Ringstrasse - a wide avenue that encircles the Old City of Vienna. We see many of Vienna's finest buildings including the impressive Hofburg Palace, a vast complex of buildings built by the Habsburgs over six centuries.

Other highlights include the ornate Opera House, which houses the Vienna Philharmonic, the grand Parliament building, which overlooks the historical Ringstraße, and the lavish Town Hall. Also known as the 'Rathaus', this eye catching building is a perfectly symmetrical Neo-Gothic masterpiece, built in the 19th century after the original 14th century offices became insufficient for use in the flourishing city.

Later today we visit the spectacular Schönbrunn Palace, the former summer residence of the Imperial family, which is situated on the outskirts of Vienna in its own beautiful landscaped parkland. This marvellous honey-coloured building has a history dating back to the 16th century, when it was built by the Holy Roman Emperor of the time, Maximilian II.

One of the most beautiful rooms in the Palace is arguably the Great Gallery, a marvellous gilded space that is somewhat reminiscent of the 'Hall of Mirrors' at the equally beautiful Palace of Versailles in Paris. We enjoy a guided tour of the palace, followed by free time to stroll through its acres of formal gardens, which are filled with exquisitely designed landscapes, gardens, and myriads of beautifully blooming blossoms.

Today's full-day excursion takes us on a cruise along the picturesque Wachau Valley, famed for its vineyards and castles. We also enjoy some time at leisure in the medieval towns of Melk and Krems. Melk is situated in Austria's winegrowing region, and is the gateway to the scenic Wachau Valley. An 11-thcentury Benedictine Abbey stands on a rocky outcrop overlooking the Danube and the town, where we can enjoy entry on this excursion.

The abbey is also home to the prestigious Marble Room and the Abbey Church, generally considered one of the most beautiful Baroque churches north of the Alps. Krems is located at the eastern edge of the Wachau Valley, where the Krems and Danube Rivers meet. A beautiful medieval riverside destination known for its wine production, the town has a charming historic center where a simple layout sees neat rows of pretty frescoed houses lining straight roads. There are plenty of wine tasting opportunities to be had in Krems, with celebrated local wines offered at reduced tariffs. 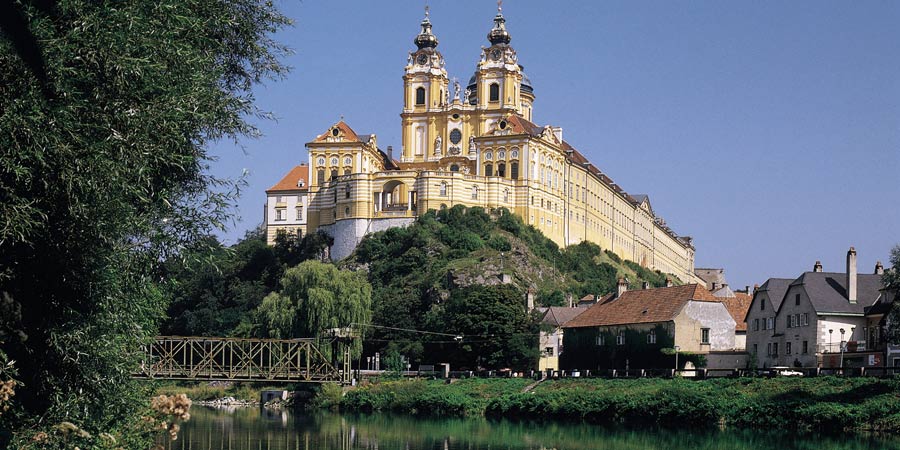 Departing Vienna in a southerly direction, we encounter the spectacular mountain landscape through which the Semmering Railroad passes. Built across high mountain terrain by around 20,000 workers during the pioneering era of the railroads, the Semmering Railroad was the first standard gauge mountain railroad and is a protected UNESCO World Heritage site due to it's incredible engineering.

We change at Leoben, traveling northwards (in Standard Class) through the wonderful mountain landscapes of the Tauern range en-route to Salzburg, a city surrounded by stunning mountains which only became an official part of Austria in the early 19th century.

Includes
Day 6 - ‘The Sound of Music’

Today we enjoy a guided tour of the lakes and mountains around Salzburg. This stunning area is renowned for its beauty, and some of the locations we visit today were featured in the classic film 'The Sound of Music.' This morning we enjoy a tour taking in some of this beautiful region's most popular sights, including Hellbrunn Castle Gardens.

We also enjoy visits to St Gilgen, a small town on the shores of Lake Wolfgangsee, and Mondsee, another lakeside town that is home to the church used in the wedding scenes of the musical. You have some free time in St Gilgen, the birthplace of Mozart's mother, to explore its picturesque streets lined with lively cafes, shops and frescoed houses. From here we continue to St Wolfgang, a pretty little town on the north shores of the lake. After taking in the delights of the area, we head back to Salzburg.

Known for being the birthplace of Mozart, Salzburg is one of Austria's most famous cities, whose center is a UNESCO World Heritage site. Here we enjoy a guided sightseeing tour. The city's internationally renowned Baroque architecture sits in one of Europe's best preserved city centres, which combines with the lovely local scenery to create a unique charm.

On completion of the tour, the rest of your day is free to spend on sightseeing at leisure. Salzburg's squares are delightful; and another popular option is the Getreidegasse, which offers retail therapy in the most splendid setting. Otherwise, take a stroll through the beautiful Mirabell Gardens, or visit the Hohensalzburg Fortress, which offers superb views of the city - and the courtyard cafés are a great place to relax with a strudel and a coffee.

This evening we make our way to Mirabell Palace, where we enjoy a sublime music concert.

We leave Salzburg by high-speed rail to Cologne, where we overnight. After breakfast on Day 9, we continue to Brussels, boarding the Eurostar to London, where our tour ends upon arrival.

You may check in at the first hotel on your itinerary anytime after 14:00; your Tour Manager will be available between 16:00 and 18:00. However, if you are arriving later, you can meet your Tour Manager before dinner from 19:00.

78% of travelers would recommend this tour

Based on 9 verified reviews

Good itinerary and helpful your manager

Really enjoyed the vacation. It was well organised and well led.

Very good overall. Guides were excellent as was the tour manager.

Everything was very well organised. The travel was excellent,first class in all respects. Hotels good. Food less so. Tour manager outstanding, the best we've had. Places we visited were everything we hoped for.

If you have mobility issues, travel can be a frustrating experience – yet, it shouldn’t have to be. Travel is for everyone, and in this modernising world, thankfully spaces are opening up to wheelchair users all around the world. We’ve compiled a list of the best destinations for disabled access, for some inspiration for your next hassle-free vacation.