Boasting misty mountain ranges and golden beaches, Wales is a country of myth and magic, renowned for its diverse and outstanding natural beauty. Widely recognized as the birthplace of Arthurian legend as Merlin the wizard, and much of the inspiration for JRR Tolkien's Middle Earth, Wales is home to some of the most spectacular scenery in Europe, such as Snowdonia National Park in North Wales, which features as its centrepiece, the ancient Snowdon - one of the tallest mountains in Great Britain. Standing tall and noble, at the most northern point of the country is the indomitable Caernarfon Castle, a magnificent medieval fortress of astonishing proportion. Further south, the Pembrokeshire Coast boasts some of finest sights in the British Isles including the white sands of Barafundle Bay, the cheerful harbor of Tenby, and St Davids - the smallest city in the U.K and the location of the 12th century St David's Cathedral.

Known as the land of song by many, Wales enjoys a rich and extensive musical heritage. Singing is part of the national identity and Wales has produced some of the finest choirs in the world as well as such world-class talents as Tom Jones and Shirley Bassey, pioneers of a quintessentially Welsh vocal style. Film and theater in Wales is equally as prominent, being the birthplace of such film stars as Richard Burton, Anthony Hopkins and Catherine Zeta Jones.  It was also the home of Dylan Thomas, the exceptional poet and playwright, and author of the radio drama Under Milk Wood - a famous work centred around the lives of characters in a fictional Welsh costal village.

Another major part of Welsh culture is sport, with rugby union frequently referred to as the national sport. Despite this title, football is just as popular here as the home nation of Gareth Bale, recognized as one of the best footballers in the world. Regardless, Wales has always enjoyed a fierce rivalry with England both on the field and off. 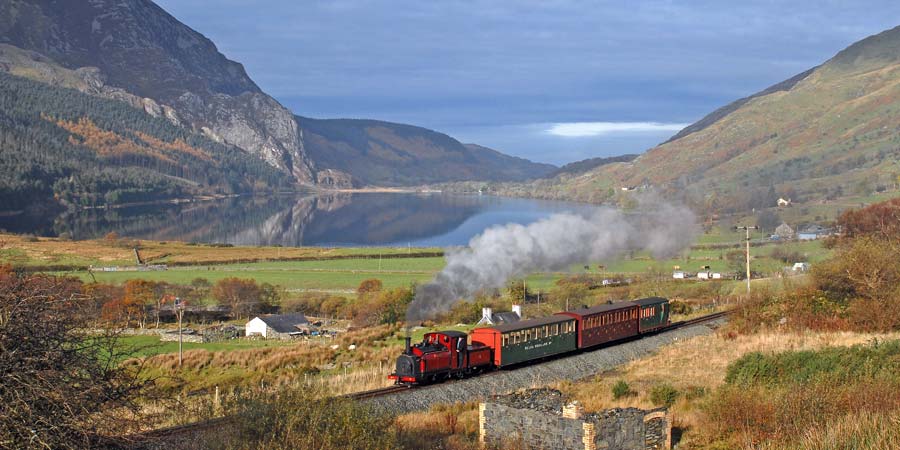 Wales possesses no fewer than ten narrow-gauge railroads, with the Ffestiniog Railroad, Welsh Highland Railroad and the Snowdon Mountain Railroad among the most popular. The Cambrian Coast railroad line travels through a UNESCO Biosphere Site between Machynlleth, Aberdovey and Borth.

Interestingly, the world's first ever passenger railroad service was created in Wales. Known as the Mumbles train by locals, it began life as an industrial rail service, carrying quarry materials between Swansea and Mumbles, before being redesigned as a fare-paying railroad in 1807. Sadly, it closed in 1960 after 153 years of service.

Welsh cuisine is notable, yet not as prominent as the food of its neighbouring European nations. Despite this, a number of dishes are specifically Welsh and offer an interesting insight into this wonderful country. One particularly enjoyable offering is the Welsh cake. This fruit scone is often sprinkled with sugar or spread with butter and cooked in a flat griddle pan. Other selections include bara brith, a fruit loaf or tea cake also known as speckled bread and cawl - a Welsh stew of lamb and leeks. Despite its name, there is no hard evidence that Welsh rarebit, a variation of cheese on toast, originated in Wales.

Wales has a temperate, maritime climate and an unfortunate reputation as one of the wettest destinations in Europe. However, bad weather is often localised and the weather throughout Wales is subject to change at a moment's notice - particularly on higher ground. Thanks to its location towards the south of the Isles, Wales is one of the warmest areas of Britain, with its summers (from May to August) usually warm and sunny and in winter the temperature rarely dipping below zero. Due to the unpredictable weather, even when it seems clear, a waterproof coat is essential, as are sturdy shoes to keep the rain out.

The Welsh language ('Yr iaith Cymraeg') is one of the oldest languages in the world, originating from the Celtic line of Indo-European languages and thought to be over 4,000 years old. It famously served as the inspiration for the Elvish language of JRR Tolkien's 'The Lord of the Rings' and 'The Hobbit'. Today, around 20% of the Welsh population speak Welsh, and this wonderful language can be seen on signs throughout the country. Two phrases which are universally useful are diolch and os gwelwch yn dda. 'Diolch' - meaning thank you - is pronounced dee-olch, where the 'ch' sound is pronounced like it is in 'loch'. 'Os gwelwch yn dda' - meaning please - is pronounced oss-gwel-ooch un thar, where the 'th' is a hard sound like in 'that'. Despite the prominence of Welsh across the country, nowadays almost everyone speaks English, with fewer than 1% of the population speaking exclusively Welsh.

Three important customs in the Welsh calender are St David's Day, the Eisteddfod and St Dwynwen's Day. St David's Day ('Dydd Gwyl Dewi' in Welsh) is the celebration of the Patron Saint of Wales, St David and traditions include the wearing of a daffodil or a leek. The Eisteddfod is a national festival of Welsh music and poetry while St Dwynwen's Day is known as the Welsh St Valentine's Day and celebrates love and romance.

Though tipping in Wales is not mandatory, any small tip is always appreciated. In restaurants, a tip of between 10% and 15% is considered customary.

The Welsh are known across Europe as being open and friendly, always ready to help and speak with people. At the same time, they are fiercely patriotic and passionate about their country, as evidenced throughout the international rugby season.