The medieval city of Siena is remarkably well preserved and boasts a mix of narrow streets, pretty open spaces and magnificent buildings focused around the great central Campo, a shell-shaped piazza. This Tuscan hill town initially developed under the Etruscans, before coming under the control of the Romans in about the first century BC. The Lombards then invaded the area around Siena and re-routed some of the region's major roads, so that they passed through the city. Countless pilgrims and traders on their way to Rome then came through Siena, cementing its position as a wealthy trading post. By the early 14th century Siena was one of Europe's richest cities, whose wealth funded the construction of many of the city's greatest buildings.

Art, architecture and history
In 1348 the Black Death arrived, and decimated the population. With only a quarter of its previous population, Siena lost much of its influence, and was absorbed into the Medici's Grand Duchy of Tuscany in 1557. Over the next few centuries the role of Siena became ever more provincial, and as a result it was untouched by either of the World Wars. Soon after this time the city was discovered by tourists, and was in such a good state of preservation that its historic center - largely dating back to the 14th century - was designated a UNESCO World Heritage site. One of the city's most famous and celebrated buildings is the spectacular Duomo. Built from alternating strips of black and white marble, the striped cathedral is one of Italy's greatest, and houses statues by Donatello, Bernini and Michelangelo as well as a unique and elaborate mosaic floor. 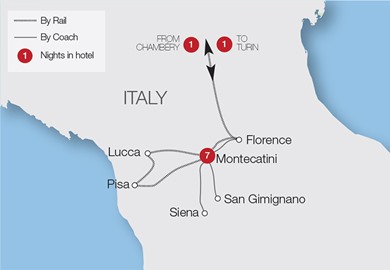 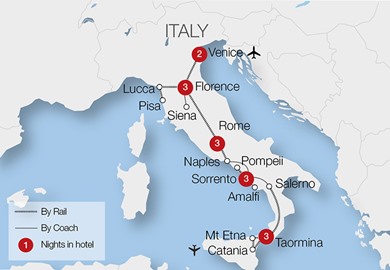 Map and accommodation
Our customers love our Siena tours
Powered by