A proud "Free and Hanseatic City" as its official title implies, Hamburg has long been firmly established as Germany's second city. The city is home to one of the largest ports in Europe, and the fortunes of the port have been directly linked to Hamburg's prosperity. The city was relatively small until 1189, when it was declared a Free Imperial City. This opened up Hamburg's potential to merchants on the nearby trade routes of both the North and Baltic Seas.

Unencumbered by dukes or princes, the autonomous city quickly became very wealthy, a position that was strengthened further when it joined the Hanseatic League in the 13th century. Hamburg's wealth made it a prime target for Allied forces during the Second World War, and it was attacked on a number of occasions - leaving its center virtually destroyed. Yet it was able to recover quicker than most European cities in the post-war years, again thanks to the trading opportunities it had.
Hamburg later became known for its music scene, and in 1961 it hosted many of the Beatles' earliest gigs. Today the vibrant city has much to recommend it; with its extraordinary setting amongst verdant parks, lakes and tree-lined canals the city is far greener than its heavy industry would suggest. Hamburg's many exciting neighbourhoods - from the bustling harbor to the lively downtown - are all easily connected and a delight to explore, and the city has been fascinating visitors for many years. 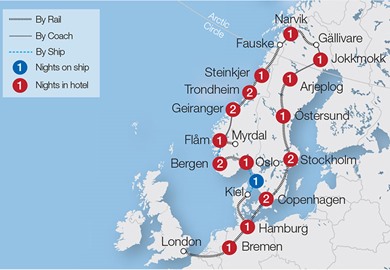 Norway’s combination of beautiful landscapes and striking urban environments make it a must see for any avid traveler. And with the Northern Lights thrown in at the peak of their season, there has never been a better time to visit this dynamic country.

The Aurora, and the Beauty of Norway

Read about our Northern Lights and Lapland 2015 tour, which features a guest speaker on selected departures, as well as an optional dog sledding excursion.