From stunning clothes, to flavourful foods, to lively festivals and an intricate and varied history, Mexico is one of the most colorful countries in the world. Explore the wonderful scenery of Mexico, from lively cities filled with architecture that ranges across thousands of years, beaches fringed with white sands, and dramatic mountains that rise ruggedly from verdant valley floors, all whilst losing yourself in UNESCO world heritage sites and discovering the incredible indigenous tribes that have been around for many hundreds of years.

This proud country has a rich and varied history, with proof of civilization that dates back to 5,000BC. Mexico is famed for numerous things in its past. Not least of which include the mighty Maya and Aztec history, resulting in the incredible architectural sites of Chichen Itza, an enormous Mayan Pyramid and even the capital, Mexico City, once known as Tenochtitlan, which served as the center of the Aztec empire.

From there came the Spanish conquest, the most famous campaign being led by Hernán Cortés, which lead to the downfall of the Aztec empire. From the 16th century, Mexico was a Spanish colony, eventually becoming independent in 1821 after 11 years of war.

Mexico is a large country which is divided by the Tropic of Cancer, meaning that climates in the country can vary from temperate to tropical, and there are usually two seasons - a wet season lasting from June to mid-October, and a dry season running from mid-October to May.

The country therefore has an incredible variety of flora and fauna, coming 4th in the world for biodiversity. Mexico has a large number of major cities, including Guadalajara, Monterrey and Tijuana. The capital, Mexico City, contains a population of around 9 million people.

Mexico has a culture known throughout the world as being vibrant and lively, from the whirling movements of the folk dances to the festivals, delving into this particular culture is an excellent adventure that promises to enthral and delight.

The clothing of Mexico is usually intricate and bold. The men on special occasions will don a Charro suit, which are exquisitely embroidered trousers and jackets that rose to fame as a symbol of the Mexican revolution. The women wear beautiful dresses, reminiscent of those of Spanish flamenco dancers, which have been modified to resemble regional traditions of the areas of Mexico.

Perhaps the most world-known of Mexico's festivals is the colorful Day of the Dead, known in Spanish as the Día de Muertos, and has been listed by UNESCO as an Intangible Cultural Heritage of Humanity. This vibrant festival is celebrated on the 2nd of November, and involves the creation of alters dedicated to family members and friends who have died. Initially celebrated at the beginning of summer, the festival gradually changed to conform to the Christian celebration of All Saint's Eve, known as Halloween, and involves a parade, sweet buns, flowers, and stylised traditional clothing with intricate face paint to mimic a skull.

The food of Mexico is varied, colorful, and extremely flavourful. Thanks to its rich cultural heritage, a lot of the food derives from ancient Aztec, Nahuatl and Mayan recipes. The Aztecs are to thank for the introduction of Chocolate, who believed that the cacao seeds chocolate comes from were sent to them by the god of wisdom, Quetzalcoatl.

Some recipes taken from the early Spanish colonial period. The most famous of the cuisine of this time includes the national dish of Mexico, Mole sauce. This delicious sauce is made with chillies, tomatoes, garlic, cinnamon, cocoa powder, and a variety of other ingredients, and is usually served over chicken.

More contemporary dishes can be seen around the world, and include tacos, burritos, quesadillas, and many more, all running along the same theme of a meat base wrapped in lovely flat breads or maize shells, and served with spicy beans. 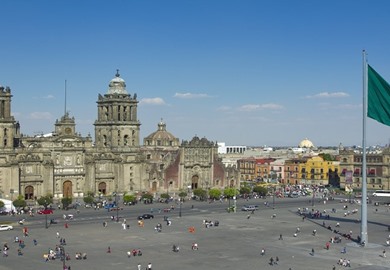 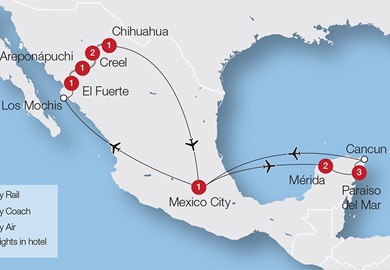