The Royal Deeside Railway Company was formed in 1996, with the aim of re-opening a section of the former branch line from Aberdeen to Ballater, which was closed in 1966 by British Rail.

After years of work from the dedicated volunteers, rail services were able to commence in 2010. Trains now run between Birkenhead Crossing and Milton of Crathes, with plans to extend the line in the near future. 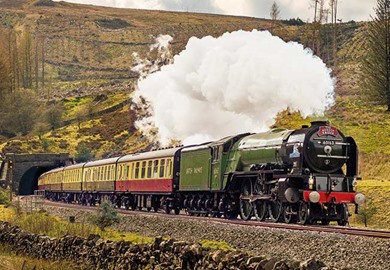 “An excellent tour, Sandra our tour manager was really efficient and the tour itself was very well thought out
Collected by Great Rail Journeys
Royal Deeside and the Tornado Steam Train
R Towner

“We did submit a review a couple of weeks ago. We enjoyed the trip very much, with the exception of the hotel in Dundee. we were asked to be seated for our meal at 7.15, which everyone one was. we were not served until 8.45 and then one person on our table didn't get their dessert. Staff took drinks orders then food and ours was the last table for everything. When the food came it was cold. Also not great choices on the menu. we felt there was an attutide of, Oh Its the party, lets serve everyone else because they are paying full whack, whereas the party will be cheap rate. If only they knew how much the holiday cost! Reception staff couldn't tell us if the rooms would be serviced, so tea and milk could be replenished and just said they didn't know and made no effort to find out. The room staff happened to be passing and said they would be. Not impressed by the Apex. We really enjoyed the day in Dundee with the guide, then free time and then the trip to Arbroath. the Royal Deeside train was nice. trip to Balmoral a bit pointless, as there was little to see. The trip on the Tornado was first Class, thoroughly enjoyable. Our Tour Guide was excellent.
Collected by Trustpilot