The California Zephyr runs from Emeryville on the West Coast of North America, across the country to Chicago, Illinois. The route covers 2,483 miles and seven states, and stops at thirty-five stations along the way. This almost country-spanning journey is a wonderful way to see the USA by rail.

The construction of the great American railroads changed the country. Established in 1949 by the three largest American railroad companies, the route of the California Zephyr has been managed by Amtrak since 1979.

When the service was introduced, there were six trains operating on the route. Each train consisted of eleven carriages, including bedroom coaches and the new, extremely popular vista dome carriages. These vista dome coaches featured the newly developed curved dome roof, which allowed passengers to enjoy the scenery from a new angle. The California Zephyr featured the most advanced designs of their time. 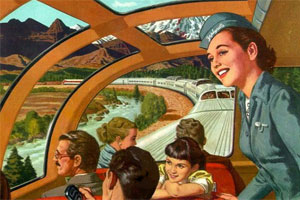 The Zephyr's complete journey takes just over fifty hours. Travelling through landscapes that vary from the historic Donner Pass in the Northern Sierra Nevada to the bay of San Francisco, the California Zephyr takes in so much of what the USA has to offer.

The journey today follows much the same route as the original Zephyr of the 1960s and 70s. Beginning in Chicago the train winds its way through the Rockies, continues through the arid country of Utah and Nevada then heads to the Sierra Nevada in California, and on towards the San Francisco Bay. Some of the more notable views from the train's famous dome cars include the Mississippi River, the vast Nevada Desert and the beautiful views of the High Sierra.

The journey was timetabled so travellers could make the most of the beautiful scenery the route offered. The journey passed through west Colorado and the Rockies during the day so passengers wouldn't miss the most scenic parts. 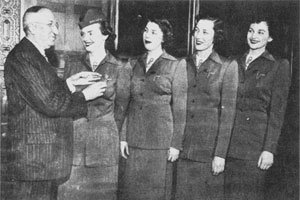 The train's hostesses were known as the 'Zephyrettes'; these were young women who had taken a course in 'railroading, babysitting and general charm'. They were all college graduates who would work with the conductor to supervise the train, and advise and help passengers however they could. They were tasked with everything from helping passengers with young children to announcing scenic spots along the train's route.

As American rail travel became more popular, it wasn't just utilised for business travel anymore. An increasing number of families were using the railroads for pleasure. The Burlington Railroad Company decided the trains would benefit from a 'woman's touch', and the first Zephyrettes were hired. During the Second World War, rail travel was discouraged, but when the war ended it once again grew in popularity. One of the original Zephyrettes, Velma McPeek was involved with helping to add and improve features of the California Zephyr's design.

California Zephyr rail holidays allow you to experience the sheer size and variety of the American landscape. Great Rail Journeys run USA rail tours on The California Zephyr, allowing you to make the journey part of your holiday.