Off the beaten tracks: Bologna

In this series we're looking at the hidden gems offered by some of the world's most famous places, and offering you tips and tricks so you really get the most out of your visit. This time we're focussing on the medieval town of Bologna, which you should be sure to visit if you're thinking about rail holidays to Italy. Often overlooked due to its close proximity to Florence and Venice, Bologna can be a more relaxed choice with fewer tourists, but just as much to offer as the more popular destinations.

Bologna has over 40 kilometres of porticos, or covered walkways, lining its streets. These date back to the thirteenth century when the population of Bologna threatened to outgrow the space available. Town planners ordered the buildings to be extended outwards into the street, but only from the first floor upwards so the city would not lose its outdoor spaces. 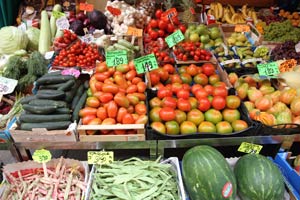 Bologna is the city with three names, La Grassa (the fat one) represents the magnificent variety of high quality produce available. Even just a five minute stroll will take you past a surprising amount of restaurants, cafés and delis.

For lunch there's the perfect place nestled just off the Piazza Santo Stefano, to the south east of the city. An easy stroll from Bologna's two famous towers, head down the Via Santo Stefano. This road opens out into the triangular piazza and you'll be facing the Basillica Santuario Santo Stefano, or Sette Chiese (Seven Churches), as it is known locally. Take the first right as you walk into the piazza and just inside you'll find the Caffè della Corte. Serving authentic Bolognaise cuisine, this delightful little restaurant gets quite busy in the evening. However, if you stop off for lunch there will usually be a seat available in the covered courtyard.

Order the Taglierone for two people (€20) and you'll receive a selection of meats and cheeses from famous local producers from the region, along with Italian bread and hot crescentine (fried dumplings). Their Lasagne Bolognese is delicious, but of course that's what you expect from the home of Bolognese.

Italian dining culture is a lot more relaxed than that in the UK, and this is most apparent in their Aperitif culture. If you're looking for fantastic value for money, head to one of the many Aperitif Buffets in the city. Here you purchase a drink for usually no more than €8, this also covers unlimited access to the buffet options, which will include a range of hot and cold delicacies. Further drinks are around €4 each, so this is a great way to spend a relaxed evening on a budget. Caffé Zamboni is located near Bologna's Two Towers, and serves amazing cocktails, and a wonderful buffet selection, from 6pm every evening.

La Dotta – ‘the learned one’ 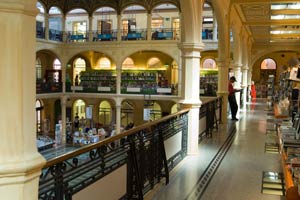 The city is also called La Dotta (the learned one) due to its university. Università di Bologna was founded in 1088, making it the oldest existing university in the western world. The universities alumni includes three popes, Nicholas Copernicus and more recently bestselling novelist Umberto Eco. 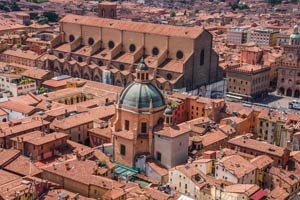 Bologna's final nickname is La Rossa (the red one), this name refers to the colour of the city's rooftops. The best way to understand why the city earned this name is to climb the famous medieval Assinelli Tower.

Strolling the porticos of Bologna centre sooner or later you'll spot the custodians of the city - Bologna's two towers, Torri degli Asinelli e Garisenda. In the middle ages there were possibly up to one-hundred and eighty towers in the city of Bologna, but fewer than twenty still dominate the skyline.

It is possible to climb to the top of the tallest medieval tower - the Asinelli Tower built between 1109 and 1119 - and only costs €3. The shorter tower, the Garisenda Tower, sits at a very noticeable angle, and is mentioned by Dante in The Divine Comedy. The top of the tower had to be removed in the fourteenth century for safety reasons. The Asinelli Tower stands at ninety-seven metres high, and those willing to climb the slim wooden steps all the way to the top are greeted with an amazing view of the city.

Bologna is an ancient city, full of secret museums, alcoves, cafés and old traditions. When visiting Bologna on rail holidays in Italy, close your guide books, follow your nose, and enjoy being a little lost in the city with three names.

A luxury train holiday to the Galapagos Islands is an amazing chance to see the islands that changed the world.