One of the largest cities in the European Union, the capital of Hungary was originally a Celtic settlement. Beginning as three separate cities on opposite banks of the Danube River, the city was unified in 1873. Throughout its colourful history, Budapest has been ruled and ransacked by many different cultures. In the not too distant past the city suffered bombing raids during WWII, and a violent uprising in 1956; scars of both are still visible on the buildings. Today the city stands reverent, but proud, with its beautiful mix of the old world and the modern world, and endless attractions for visitors, it must be included on all great rail holidays. 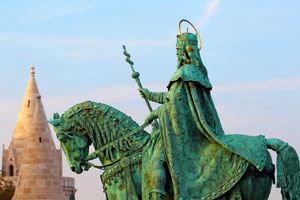 Budapest can trace its history back as far as the Stone Age. There were settlements on both sides of the Danube River, where present day Budapest stands. Evidence of Bronze Age settlements have also been uncovered. The area was originally built upon by Celtic settlers and later, in the first century BCE, the Romans occupied the town. Between the first century BCE and the fifth century CE, Western Hungary, including current day Budapest, was a part of the Roman Empire. Western Hungary was known as Pannonia, and its most important town was Aquincum - which was the ancestor of Budapest, and played an important role in this part of the Roman Empire.

After six hundred years of Roman rule, the town of Aquincum was taken by the Huns. Attila, King of the Huns, built up a great new kingdom in what is now Hungary. Various forces vied for the area in the following centuries, including the Lombards, Avars, Slavs and then the Magyars.

Hungarian tribes arrived towards the end of the 9th century, and in 1000CE the Hungarian Kingdom was established. After a Tartar invasion in the 13th century, King Béla IV of Hungary ordered the city be fortified with stone walls, and built his own royal palace on top of the hills of Buda for greater protection. Buda became the capital city of Hungary in 1361. Throughout this time there were still three separate cities, along the banks of the river, Óbuda, Buda and Pest.

During the Italian Renaissance, the city of Buda would become an important cultural icon. The Bibliothecha Corviniana contained the greatest collection of philosophic, historical and scientific works in Europe; the library was second in size only to the Vatican. Two universities were established in Hungary during this time, one in the city of Pécs and later in 1395, one in Óbuda.

In 1526, the Ottomans pillaged the city of Buda, in 1529, they besieged it and in 1541, they finally occupied it. The Turks of the Ottoman Empire would remain in the city for more than one hundred and forty years. The city's Christian inhabitants largely converted to Islam, and the city's grand churches were converted into mosques.

In the 1600s a campaign was organised by the Holy League to retake the city. This army consisted of soldiers from all over Europe, and succeeded in reconquering the cities from the Turks, and in following years also recaptured most of the former Hungarian lands.

The pearl of the Danube 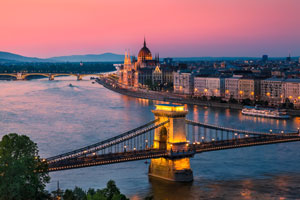 The 17th century saw the cities built back up to large economic and cultural significance. The Chain Bridge was opened in 1949, which connected the cities on opposite sides of the river. In 1872, the three cities along the banks of the Danube River were united, to form Budapest, which was made the capital city of Hungary. The newly formed city grew in size and importance, and in 1896 opened continental Europe's first underground railroad.

The outbreak of the First World War was particularly hard on Budapest, who fought on the side of Germany and Austria, and the city struggled in the years between the wars. Near the end of the Second World War Budapest became a front line city as Hungary was once again allied with the Germans and the Soviets; the German Army barricaded themselves in the castle quarter, and as a result the city suffered severe damage from air strikes. All bridges were destroyed during the fighting.

In early 1945, the city was under strict Soviet rule and in 1949, was declared a communist republic, the 'People's Republic of Hungary'. The Communist government didn't look favourably on Budapest's historical buildings, such as Buda Castle, which was gutted with the interiors completely destroyed. In 1956, the citizens of Budapest held a large, peaceful demonstration to demand democratic changes and protest against the economic hardships they were suffering. These protests led to the beginning of the Hungarian Revolution, which the Soviets reacted to with massive force. Budapest city centre was devastated.

The 1960s and 70s saw much of the wartime damage to the city finally repaired, and Budapest was often called 'the happiest barrack' of the Eastern Block. Work on the final bridge to be repaired after the war was completed in 1964. Extensions to the metro were completed, luxury hotels were built along the river banks and the city became a popular tourist destination. The fall of the Iron Curtain, and transition to free elections and democracy took place almost effortlessly in Budapest.

Today Budapest is a modern and tolerant city straddling the banks of the river. Sombre memories of its troubled past are marked with poignant reminders, such as the Shoes on the Danube memorial. The city's architecture is a mixture of baroque, neo-classical, Eclectic and Art Nouveau. Many of the city's architectural gems from Budapest's 'golden age', during the 19th century have been restored to their former glory.

Hungary's tumultuous history mixes with the bustling metropolis of modern day Budapest to create a truly unique experience for visitors. Discover the beauty of Budapest on European train holidays.