The Jungfrau Railway ascends from Kleine Scheidegg to the highest railway station in Europe, Jungfraujoch, which is carved entirely out of the mountain. 'The Top of Europe' receives over 750,000 visitors a year, and is undoubtedly one of the great destinations on Swiss rail holidays. The journey takes a little over two hours, and during peak season there are two trains an hour.

Although seven of the lines nine kilometres are spent in tunnels, the scenery that presents itself at the top is breathtaking. Many stations along the route are set in the mountain, these have panoramic viewing windows carved out of the rock providing astounding views of the mountain scenery. One of these breathtaking views is the 'Eismeer', also known as the 'Sea of Ice', one of the largest glaciers in Switzerland. 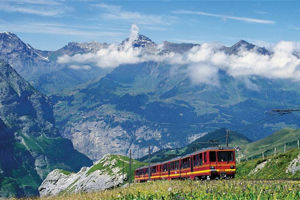 The Jungfrau railway was built by Adolf Guyer-Zeller and fully opened in 1912. It was an impressive idea from its conception - to build a railway running up to the top of Europe. His plan was to harness the power of a local river, creating electricity to power a state of the art electric cog railway.

Reaching Jungfraujoch presented a number of challenges, as the line had to be built through two of the tallest peaks in the Alps. This required building seven kilometres of tunnels through the mountains, and means that over half of the railway journey is spent in tunnels through the mountain. In total only two kilometres of the railway line are out in the open.

When work began on the railway there were concerns that rising to such an altitude so quickly could pose a risk to health. A medical report was commissioned by Guyer-Zeller to reassure people of the line's safety.

The first part of the railway was laid between the open air stations of Kleine Scheidegg and Elgergletscher station - no machines were required for building the beginning of the route. Taking two years to build the first section by hand, it was opened in 1898 at a grand ceremony. This ceremony was designed to secure investment for the railway, which it was successful in doing.

Work continued on the railway, and the next station, Eigerwand station, opened in 1903, followed two years later by Eismeer station. A tourist centre was built at Eismeer station to help raise funds for construction of the next section of the railway. The company also decided to change the original plans for the line and move the railway terminus from the summit of Jungfrau, to Jungfraujoch.

The final station along the route, Jungfraujoch was opened in 1912. The original railway carriages were made of wood, and the journey took longer than today. There is still one of the original 1912 wooden carriages available to hire.

'The Top of Europe' 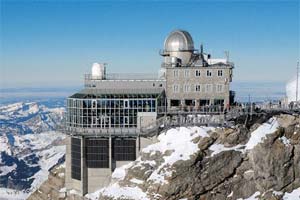 Once you've reached the summit of the line, the climax of the journey is the Sphinx Observatory, perched one hundred and seventeen metres above the station among glaciers and mountain peaks. Here the views over the Alps are spectacular, but the building was not built for simply viewing the beautiful surroundings. The Sphinx Observatory is a part-time home to scientists. Originally scientists used Jungfraujoch to study high altitude medicine along with astronomy. Today the scientists are documenting climate change, daily weather observations are sent to Zurich.

The highlight of Swiss rail holidays, the journey up to Jungfraujoch is truly unforgettable. Visitors get a first-hand Alpine experience with an opportunity to admire the scenery from the viewing platform on the Aletsch Glacier, or use their free time to visit the spectacular Ice Palace.

Swiss railway holidays on The Jungfrau Railway are an experience unlike any other. Travel with Great Rail Journeys and let us take you to the top of Europe.