Green hills and fertile plains form the back drop to the eastern Alps. Grapes, vines and wine making are integral to this region of Italy and wine making has been practiced here for centuries. The province of Treviso, Veneto, is perfectly situated to produce fine white grapes, and in particular the Glera, or Prosecco grape. Train holidays to Italy from the UK would not be complete without sampling a bottle - or three. Around 60% of all Prosecco is made in the Conegliano and Valdobbiadene area, leading to the area becoming known as the 'Prosecco Wine Road'.

The first Italian school of Oenology was founded in 1876 at heart of Conegliano and still trains over 90% of the regions oenologists along with wine makers' allover Italy. Prosecco is not solely produced here, but only this region can lay claim to Prosecco superior D.O.C.G., the best Prosecco in the world. The grapes used to make this superior Prosecco can only be grown in a precise area stretching from Vittorio Veneto through Conegliano, Susegana to Valdobbiadene. The micro climate, created by the vicinity of the mountains is the key to producing the special Prosecco grape. However the vineyards are extremely difficult to cultivate, many of them being set on steep slopes. Vines are tended by hand, and this tradition is passed down from one generation to the next. Manual cultivation is the only way to manage the steep hills along the Prosecco Wine Road.

Along the Prosecco wine road 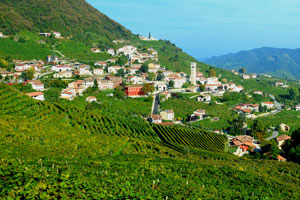 The Prosecco Wine Road winds its way through vineyards which sit on the side of the steep hills between Conegiliano, Vittorio Veneto and Valdobbiadene. Described as one of the prettiest corners of Italy, farmers and wine makers have been perfecting their craft here for centuries. The Prosecco Wine Road can be driven in one day, but to really experience the beauty of the area it's best to take your time. Spending a night in one of the many hotels or bed and breakfasts will give you a real feel for the history and tranquility of the region.

Beginning the journey at Conegliano, you will discover the historical significance of this industrial city, with elegant buildings dating back to the 15th century. The road begins at the Castle, which today is a public museum. The road winds gently along the hillsides to a pretty Romanesque parish church from the 12th century and then on to Refrontolo. Don't miss the beautiful 16th century watermill, Molinetto della Croda, which has been painstakingly restored and is open to visitors.

Continuing along the hills amongst vineyards perched on the high uneven slopes, the road reaches Follina. A town surrounding the Santa Maria Abbey, built in the 12th century. The monks who resided in the abbey ran a prosperous wool processing trade, which the town grew up around.

Travellers on the Prosecco Wine Road then head towards Valdobbiadene, and reach the area where the famous Cartizze spumante is produced. The hill of Cartizze is heralded as producing the highest quality Prosecco. According to local legend, because the hill is so steep and difficult to harvest these grapes were harvest last. This extra time on the vine allowed the grapes to develop a more distinctive flavor.

This area contains the highest concentration of wineries, most of which are open for tours and wine tastings. The Prosecco Wine Road ends at Valdobbiadene, where the annual Forum Spumante d'Italia is held. The most important event for Italian spumante producers. 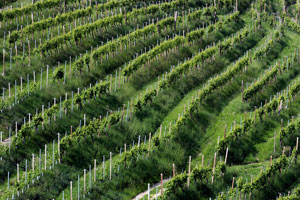 Prosecco is made from the Glera grape, and is intended to be drunk young. Italian tradition dictates that Prosecco should only be drunk during the springtime, and the years yield should be gone in a couple of months. Three varieties are available, tranquillo (still), frizzante (slightly sparkling) and spumante (sparkling). Tranquillo, the still variety is rarely exported, and is not as well known outside of Italy.

If you'd like to visit the heart of the Mediterranean, holidays to Italy by train are a wonderful way to experience the beauty of Italy. A journey on the Venice Simplon-Orient-Express from London to Venice will take you through the beautiful European countryside, towards the Prosecco Wine Road.

The Trans-Siberian Railway history is full of impossible feats, years of work and the constant battle against the elements.