Siesta? I think I've earnt it! 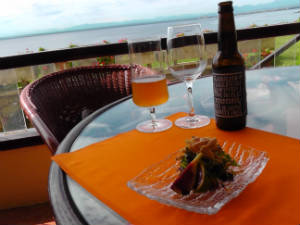 Stewart Creasey takes on the challenge of lunch at the Almadraba Park Hotel in Roses.

It's a beautiful sunny day in late-September and I'm in the pretty town of Roses at the north-eastern end of the Costa Brava - a rocky stretch of the Spanish coastline to the north of Barcelona. Actually, I'm just outside the main town in a secluded cove just around the headland of the beautiful Bay of Roses. I have come to visit the Almadraba Park Hotel, the base for a leisurely 9-night tour organised by rail holiday specialist Great Rail Journeys.

The Almadraba Park Hotel stands on the cliff top above the crystal-clear Mediterranean Sea, only a few steps from the white sands of the quiet Almadraba Beach. In the hills above the hotel lies the Cap de Creus National Park. The setting is close to perfect, with views stretching across the entire Bay of Roses and out over the Mediterranean.

I spent this morning on a leisurely cruise to Cadaques, a pretty, white-washed fishing village which Salvador Dali once called home. I have returned to the Almadraba Park for a late lunch - a meal I've been looking forward to since I first began planning this trip!

The Almadraba Park is a hotel which prides itself on its cuisine. Not all hotels take this approach - for many, food is a secondary consideration, or simply a 'convenience service' offered to guests. The Almadraba Park has a huge army of staff in its modern kitchen, including 16 chefs, as well as an army of cheerful, knowledgeable waiting staff. Everything on the menu is freshly prepared in the hotel each day. 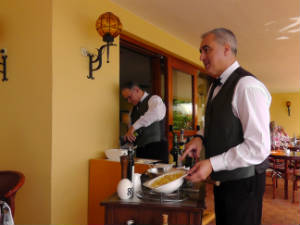 The hotel manager, Jordi, is clearly proud of the food served at the Almadraba Park. He is also quick to point out that everything on the menu is sourced locally - fresh fish is caught in the Bay of Roses and all meat and vegetables are produced by local Catalan farms. He also wants to make it clear that all diners at the hotel eat from the same menu - there is no separate "group dining" menu.

Lunch is served on the terrace, located beside the hotel's private garden and overlooking the bay. It couldn't be a more perfect setting. As I take my seat, a group of business men and women at the next table are choosing what they want from a tray of shiny fresh fish.

I'm presented with a delicious Catalan Malt Beer and today's menu. On one side are a selection of today's specials, with four starters and four main dishes; on the other side is the fixed menu. Today's selection of starters includes "Duck's Magret Carpaccio with Vegetable Tagliatelle", a "Backwards Paella" which comes with a note saying it will take at least 20 minutes to prepare, "Vegetable and Langoustine Tempura with a curry sauce" and "Fried Fish Costa Brava". The main courses are "Fresh Salmon 'En Papillote' with sage", "Fishes 'Suquet' with Rossevalle Potatoes", "Grilled Veal Entrecote Girona" and "Roaste Rable Rabbit with Perol Catalan Sausage".

Shortly after ordering my meal, a selection of fresh bread arrives, quickly followed by an 'amuse bouche' (the Spanish equivalent of an amuse bouche is probably simply 'tapa'). For my starter I've chosen Fried Fish Costa Brava, which turns out to be a beautiful selection of small fish in a light salt and pepper batter, served with a wedge of lemon and aioli. The dish was simple, but absolutely delicious. 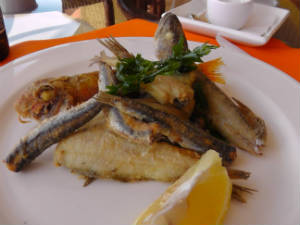 Before the main course arrives, I am treated to the sight of two waiters serving "Macaroni Flambé" to the 'business meeting' at the next table. Pasta may not be a particularly Spanish ingredient, but it is fascinating to watch the dish being created at the table side, sauced, flambéed with brandy and garnished with fresh herbs and parmesan cheese. It is certainly well received by its grateful recipients and a delighted audience of other diners. It appears to be a less-than-productive business meeting.

For my main course I chose the rabbit - a decision which was greeted by a nod and smile of approval from the waiter. It was wonderful - the succulent rabbit was served on fondant potato, with a rich cider jus and full-flavoured Catalan sausage meat. The accompanying caramelised apples cut through the saltiness of the sausage perfectly.

By the time dessert arrived I was already feeling full, but for the sake of research (true dedication to the job!) I just had to soldier on. I chose the smallest option available from the ample selection on the dessert trolley; a simple raspberry cheesecake. The cheese was virtually unsweetened, which came as a shock considering what you would normally receive in the UK. However, the lack of sweetness in the cheese actually gave it added depth - the sweetness of the raspberry is made to work a bit harder and gives the cheesecake contrast and balance.

I declined coffee after the meal and instead headed to the beach - about 50 steps down through the private gardens and cliffs. I've never been one for a siesta, but it seemed the only sensible thing to do. After that meal, I really felt like I had earned it. The 50 steps back up to the hotel would burn a few calories after my sleep. Well, enough to take care of the duck foie gras at least!