Nuremberg is the administrative capital of Middle Franconia, situated on the Pegnitz River and the Rhine-Main-Danube Canal. With a population in excess of 500,000, it is Franconia's largest city. The city was the centre of German Renaissance during the 15th and 16th centuries, and has particular historical significance due to its role during the Nazi Period. The Nazi Party held their conventions (the Nuremberg rallies) in the city between 1927 and 1938. After Hitler's installation as the Führer, the Nuremberg rallies became huge propaganda events. In the years after World War II, the city hosted the war crime trials of many of the key Nazi officials - known as the Nuremberg Trials.

The Old Town of Nuremberg dates back to medieval times, and within the city walls of the Old Town there are several Gothic Churches, including the Frauenkirche. Built between 1355 and 1358 on the site of a destroyed synagogue (in what had been the Jewish Quarter), "Our Lady's Church" was the first Gothic hall church in Franconia, and was given to Nuremberg's Catholic congregation in 1816. The church opens for visitors at 0900, closing at 1700.

The Handwerkerhof (Craftsmen's Courtyard) is located in the middle of the city, and is surrounded by the towers and walls of the medieval city fortification. It is a little town of its own where you can discover workshops and shops from craftsmen such as pewterers, glassmakers, engravers, potters, gold and silversmiths, and many more.

Nuremberg Castle is located on a sandstone rock in the north of the city, and comprises three parts: the Emperor's buildings ("Kaiserburg"), the buildings of the rulers of Nuremberg ("Burggrafenburg"), and the buildings on the eastern side ("städtische Burganlage"). Between 1050 and 1571, all of the Emperors of the Holy Roman Empire of the German Nation were resident here at some point. 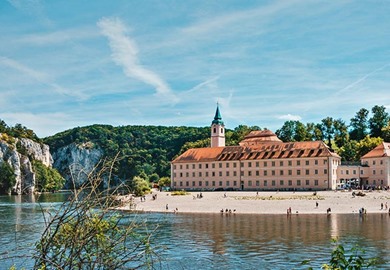 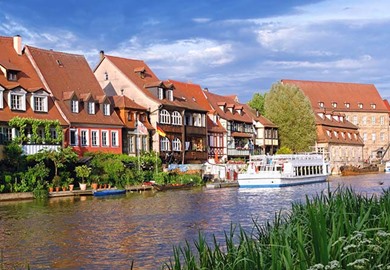 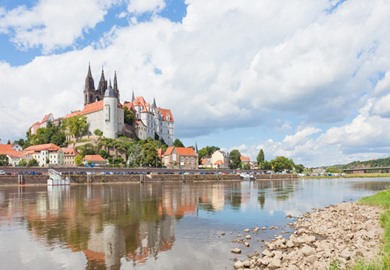 Colditz, Meissen and Saxony by Steam 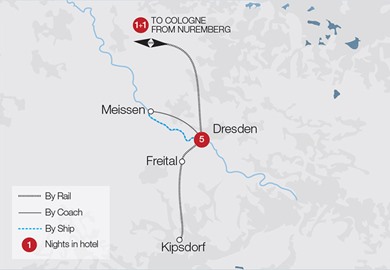 “The tour manager was brilliant and the group made up of interesting and nice people who geld as a group of travellers. Hotel were very nice and the Eurostar was a great experience as was the German rail network.
Collected by Great Rail Journeys
Cruise - Danube Delta to the Austrian Lake District
Mr J Mann