Estonia's beautiful capital city is filled with pretty churches and charming cobbled streets. Its central, Old Town district (Toompea) is surrounded by historic and wonderfully preserved defensive walls. Toompea is the oldest part of Tallinn and is the often referred to as the most attractive part of the city. Throughout its history, this part of Tallinn has been home to the top echelons of society, including aristocrats, top politicians and the city's wealthiest residents.

However, many tourists and locals will point to Lower Tallinn when asked to name their favourite part of the city. This part of the city, known as An-Linn, is arguably as beautiful as Toompea - the cobbled streets, limestone buildings and terracotta-tiled roofs have a real charm, and this area certainly has a more vibrant, welcoming street life.

One of the city's main attractions is the unusually named "Keik in de Kok", which means "Peek into the kitchen". This historic tower is believed to have acquired its name due to its height, which allowed those in the tower to see through the windows of the surrounding buildings. The tower houses a permanent exhibition of Tallinn's military history and serves as an entrance to the Bastion Tunnels, a network of hidden tunnels built in the 17th century during Swedish rule. Other sights of interest in Tallinn include the Alexander Nevsky Cathedral, the 15th century Tallinn Town Hall and the 18th century Kadriorg Castle. 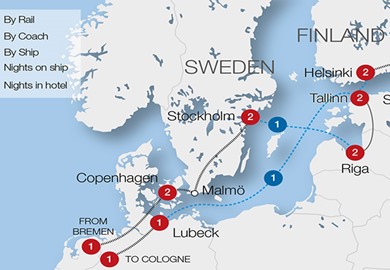 “Tour manager was excellent. All the other people on the tour were very friendly and this made the tour extremely enjoyable.
Collected by Great Rail Journeys
Lastest articles from our journey blog