The Brienz-Rothorn Mountain Railway is notable for a number of reasons. To name a few, it is powered almost entirely by steam engines, it is one of the steepest railways in Switzerland - and of course it passes some truly wonderful scenery on its route from Brienz to the peak of Rothorn Mountain.

Our journey on the narrow-gauge line begins in the lakeside town of Brienz. Immediately after departure, Brienz-Rothorn Mountain Railway begins its steep ascent up the mountain. The rack-and-pinion line traverses a number of bridges, crossing the steep, stony mountain trails as it continues to climb. For much of the route the glittering waters of Lake Brienz can be seen, and as we climb further, the view becomes yet more dramatic.

We continue through the undulating greenery, with views out to the surrounding jagged peaks. Before long, we reach the first of three passing loops for oncoming locomotives, before travelling through woodland and a series of tunnels hewn from the rock. We then arrive at the second passing loop; here some of the older steam engines pause to take on water. Finally we reach the line's terminus at the summit of Rothorn, 7,362ft above sea level, and four-and-a-half miles away from our starting point in Brienz. 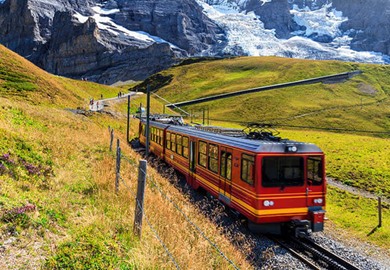 Wengen and the Jungfrau Express 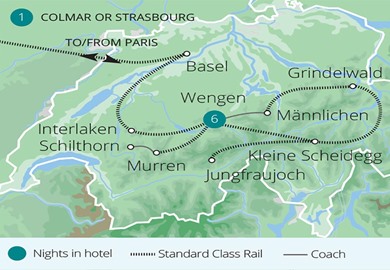 “Sweitzerland was so pretty. Their trains were clean and bright and their staff at local level were very pleasant. Our hotel was full of character but was too far up the hill in Wengen.
Collected by Great Rail Journeys