My Rocky Mountaineer trip started at York train station waiting to board the train to Kings Cross, London. I arrived and made my way across London to catch the Heathrow Express. Arriving at my hotel for the night staff informed me there was a free bus I could take back to the airport tomorrow - when the real Canada trip begins.

After a 6am wake-up I had a quick breakfast and walked across the road to get the free hopper bus service back to Heathrow Airport. The flight took just nine hours. We landed at 12:30 local time and headed to the Fairmont Waterfront Hotel in Vancouver.

The hotel was excellent, my room was on the 17th floor overlooking the harbour. That evening our group met in the hotel bar for welcome drinks with our host, before heading out to one of the local restaurants. 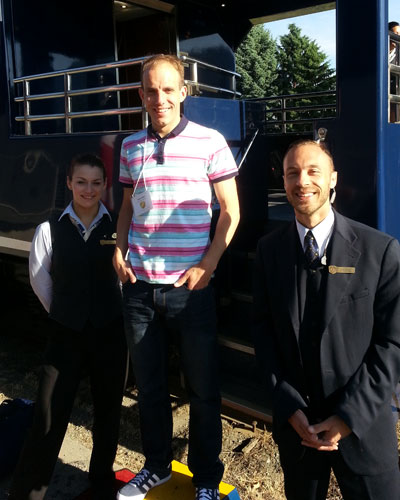 We met our guide for the day, Krista Keiser from Tourism Vancouver in the hotel reception for the start of our day's activities. First up was a visit to the Capilano Suspension Bridge, situated slightly out of the city centre. We spent about 90 minutes at the Capilano Suspension Bridge with our guide, the tour was shorter than usual because we had much more to do. If you have a fear of heights then this would probably not be the best thing to do!

We drove back to the city centre to Spokes Bicycle Rental for a guided cycling tour around Stanley Park. The whole tour took about 80 minutes, with about 40 minutes of gentle cycling. The tour was a great way to get around the park as the perimeter is about 10km in total. We headed to Granville Island for lunch, to the very popular public market with hundreds of stalls, and places to grab a bite to eat.

After lunch we took an Aquabus ferry on a mini cruise around False Creek, seeing Vancouver from a different perspective was really interesting. We docked in a place called Yaletown, where our coach driver was waiting to take us on a short guided tour through China Town and historic Gastown.

We then took a trip up the watch tower, Vancouver Lookout, with a spectacular 360 degree view across the city. After this we walked to Canada Place.

Here we took part in what's called 'FlyOver Canada'. This is a flight simulation which takes you across Canada in the most fantastic fashion. This was the highlight of day and something that I'd highly recommend. You get strapped into a row of seats and hover above the ground like you're on a roller coaster. You really feel like you are flying with effects of mist spraying you as you fly over Canada. The 'flight' lasts eight minutes and is great value for money and people of all ages can enjoy it!

After the day's activities were concluded, we headed for dinner. The next day we'll be boarding the Rocky Mountaineer to Kamloops.

This was the day we boarded the world famous Rocky Mountaineer. We arrived at the station and were 'piped' onto the train by a bagpiper. We departed the station at 8am, and shortly after were called to breakfast in the restaurant downstairs.

After breakfast, at 9:45am, our host declared the bar open for alcoholic drinks, which was greeted with cheers and applause! As we snaked our way through the spectacular scenery of the Rockies, there was regular but not over-the-top commentary, the hosts kept it light-hearted and good humoured.

We continued winding our way alongside a fast flowing river, occasionally coming across little pockets of civilisation. We arrived into Kamloops station at 5pm, where we disembarked the train and hopped onto a coach for our ten minute transfer to the Coast Hotel for our overnight stay.

The scenery on today's journey was spectacular. Everyone was on the lookout for bears. The train staff all communicate with each other, so if someone spots a bear they radio all the carriages. Finally when we did, the train slowed down so we could get a better look. It was an impressive sight and everyone was excited to see a bear roaming in the wild. We arrived into Jasper at about 5pm. Before we disembarked, our carriage hosts said goodbye to us all individually, the train staff really made the whole Rocky Mountaineer experience very special.

We then took a coach to our hotel for the next two nights, Chateau Jasper. Jasper has a population of about 4,000 people, as it was Saturday night there were quite a lot of people out in the bars and restaurants. The sun setting behind the surrounding mountains made a spectacular end to the day.

On our first full day in Jasper the weather was perfect, with hardly a cloud in the sky. At 9:30 we boarded a coach for a sightseeing tour through Jasper and the surrounding area. The guide took us around the town and out into the woods to see some stunning lakes. After our sightseeing tour ended we had the rest of the day at leisure. We stopped off at a visitor centre, where there were trails to walk, a shop and a café on hand.

The morning began with a rainy start to the day and there had been some snow on the mountains around Jasper. After breakfast we departed the hotel by coach, we were due to arrive into Lake Louise by 4pm. On the way we visited the Columbia Icefield, with an Ice Explorer ride on the Athabasca Glacier. The Ice Explorer is similar to a snow truck, with large wheels and only travels at around 10mph. We spent about 20 minutes on the Ice Explorer, with the opportunity to get out and take pictures on the glacier. Tip! Sunglasses are a must as it gets extremely bright.

That afternoon we arrived at the very impressive Fairmont Waterfront Hotel, on the shore of Lake Louise. The day before we arrived Lake Louise had officially been declared as 'thawed out'

Waking up with Lake Louise was probably the most amazing view I've ever experienced from a hotel. My room was a partial lake view room but it was still incredible.

Our coach departed Lake Louise and we started our journey to Calgary. Along the way we drove through Banff and stopped off to take a spectacular gondola ride up Sulphur Mountain. After we finished the gondola ride we had a few hours to visit the shops of Banff. We continued our journey by coach through Banff National Park with regular stops at viewing points to admire the lakes and mountains.

Our next stop would be Kananaski for a helicopter ride over the Rockies. The experience was a brilliant way to see the Rockies with on board radio communication and commentary - definitely one of the highlights of the tour. After this we continued our journey into Calgary.

After a lie-in this morning we took a taxi into the centre of Calgary. We visited Calgary Tower, which is an observation tower that stands 525ft above the ground, offering amazing views of the city. There was a chance to stand on the glass floor at the top of the tower, which for some was a terrifying experience! Before you go up the lift to the tower you are made an honorary Calgarian at the foot of the tower. This involved making a pledge and receiving your very own cowboy hat.

At two 'o'clock we headed back to Calgary Airport to collect our bags and walk across to the airport to check-in for our flight home. Once back on UK soil it was time to head back to York and home after a truly fantastic trip!