'Roof of the World' Train

Opened in 2006, the 'Roof of the World Railway' is a masterpiece of modern engineering, connecting Xining, in mainland China, to Lhasa in Tibet, travelling at the highest elevation of any train globally. Whilst parts of the route were completed in 1984, the extension into Tibet was finished in 2005, and opened to the public the following year. Our journey passes over the Tibetan Plateau, a region which features permafrost that melts and refreezes as the seasons change, and which proved a challenging feat of engineering to overcome during the railway's construction. 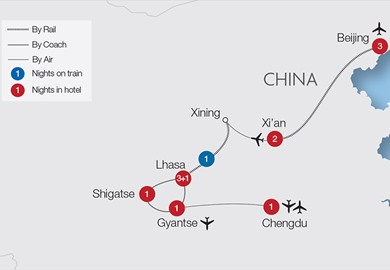 Beijing to Tibet - 'Across the Roof of the World'
Mr D Holdstock
“The was a great experience not a lot of down time. The high altitude did hit one or two of us. I would recommend this tour for its historic and geographical interest.