The Centovalli Railway was originally planned to connect Locarno in the Italian-speaking region of Switzerland with Domodossola in the very north of Italy. The line's opening was delayed considerably owing to the First World War, but construction was resumed almost immediately afterwards and the first services began in 1923.

The railway's name means "One Hundred Valleys", which is taken from the many valleys that the line crosses and passes through on its route. The line's passenger numbers dwindled following the Second World War, but it has remained open continually, having now become a much-loved tourist attraction. 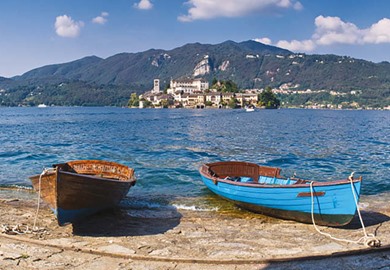 “A lovely location. Our room at the Hotel Bristol was very disappointing with insufficient storage space and an over-bath shower for which the screen was at the opposite end of the bath, causing the bathroom to flood. Choice of food at the hotel varied, depending on whether you were part of a group or a private booking. The so-called hot breakfast was always cold, not what one expects from a 4-star hotel. We would return to the area bot not the hotel.
Collected by Trustpilot
Best of the Italian Lakes
neil cuthbert

“An enjoyable, well planned itinerary but Lake Orta, although beautiful is the ideal location to write your memoirs but rather too far off the beaten track; if you like a lakeside stroll to a nearby cafe for an after dinner drink or a coffee, choose one of the larger, albeit perhaps more tourist-oriented of the Italian Lakes.
Collected by Trustpilot