The city of Puno is located on the shores of Lake Titicaca - an amazing deep blue lake which is 121 miles (195 kilometres) in length, with an average width of 31 miles (50 kilometres), which makes it the largest lake in South America and the largest in the world above 6,562 feet (2,000 metres) in altitude. According to Andean legend, Lake Titicaca was the birthplace of civilization. Wiracocha, the creator god, brought light into a dark world by directing the Sun, Moon and stars to rise up out of the lake and take their place in the sky. In time, the Sun and Moon had children who also rose from the depths of the lake.

These new people were sent out from Titicaca to the four corners of the earth, with Manco Capac and his sister-wife Mama Ocllo and their family clan being sent off to inhabit the Cusco region. Inca legend believed that Manco was the first Inca and a direct descendent of the Sun. The supposed location of the birthplaces of the Sun, Moon and Manco Capac are found on islands on the Bolivian side of the lake: Isla del Sol (Island of the Sun) and Isla de la Luna (Island of the Moon). The city of Puno, whose full name is San Carlos de Puno, was founded in 1668 following the discovery of silver mines in the region. Before this, Puno had simply been a stopping place for people travelling between the much larger silver mines at Potosi in Bolivia and Lima. 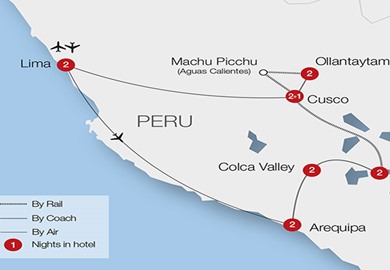