The Venice Simplon-Orient Express and the Belmond British Pullman

Explore Venice and a legendary train

Our holiday begins as we meet our Tour Manager at London St Pancras before taking the Eurostar to Paris. Here we change trains, travelling to Geneva and continuing to Montreux spending the night directly on Lake Geneva's shores in the 5-Star Royal Plaza Hotel.

We return to the station on Day 2 for our rail journey directly to Venice. On arrival, we check into our hotel for the next 3 nights, the 4-Star Hotel Papadopoli Venezia. We are free the rest of the day to settle in and start exploring. 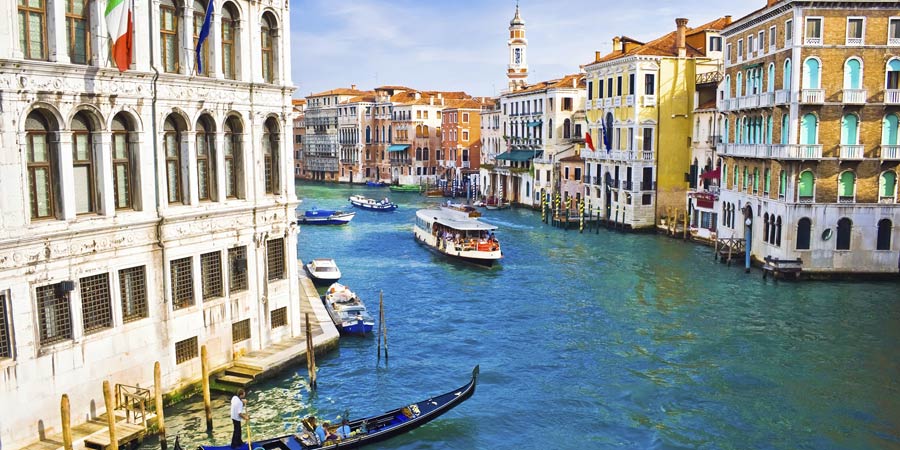 This morning, we set out to discover the grandeur of this floating city on a guided tour. The entire city depends on its network of waterways and we are transferred by boat to St Mark's Square. After disembarking, we take a guided walking tour starting in St Mark's Square. This famous square is flanked by several historic buildings including the Basilica di San Marco, known for its many domes and 86,000 square feet of mosaic walls, vaults, and cupolas. The piazza also houses the Museo Correr, home to an extensive collection of art.

We walk down to the Rialto Bridge, the oldest of the 4 bridges that join the 2 banks of the Grand Canal. Built between 1588 and 1591, this white stone-arch bridge is famous for its multiple walkways. Our next destination is the Bridge of Sighs, an enclosed bridge made entirely of white limestone that connects the interrogation room in the Doge's Palace to Prigioni Nuove, a former prison. Legend has it that the bridge was so named because the closed vestibule was filled with the sighs of thousands of prisoners who were deemed guilty in the interrogation chambers before being transferred to the prison. Such is the bridge's attraction that it even found mention in Lord Byron's famous narrative poem, Childe Harold's Pilgrimage.

After the tour you are free to explore on your own. Perhaps, visit the Doge's Palace, a Gothic building, home to the Doge, the supreme authority of Venice, since the 14th century. In 1923 it was converted into a museum and most of the paintings we see were commissioned specifically to decorate the walls for visitors. Lace-like patterns carved on pink Verona marble, gracefully arching windows, and an ornamental main entrance make the palace an architectural masterpiece. After a day of explorations, we return to our hotel by boat.

We are free today to explore Venice at our own pace. Perhaps take the ferry to the nearby island of Burano, known for its colourful fishermen's houses and eateries that serve the freshest seafood. You could also venture to the island of Murano famous all over the world for its thriving glass manufacturing industry. This evening, we experience a slice of Venetian high life, stepping aboard a traditional gondola and taking in the illuminated beauty of Venice as we navigate the canals with our expert gondolier. We disembark at a Venetian palace where we enjoy a multi-course dinner of local specialities in an exclusive dining hall accompanied by the splendour of this historic mansion.

This morning we embark on the highlight of our holiday - a timeless journey on board the luxurious Venice Simplon-Orient Express. The opulence of this train has fired the imagination of many writers, most famously Agatha Christie who penned Murder on the Orient Express after a journey in 1931. We settle in our twin-bed cabins whose Art Deco interiors flaunt French, Venetian, and Turkish influences, plush upholstery, wide windows, and stylish lighting; the train offers the comfort of a 5-Star hotel while evoking the thrill and romance of rail.

After enjoying a sumptuous 3-course lunch in one of the 3 restaurant cars, we are free to relax in the afternoon as our decadent journey takes us past rolling meadows, snow-kissed peaks and idyllic villages of Italy and Switzerland. Later this afternoon, we are served a selection of pastries in our cabin. Dinner is a formal 4-course affair prepared by our highly skilled onboard French chefs and we dress suitably for the occasion. Later, why not enjoy a nightcap at the bar with new friends, before retiring to our cabins for a good night's sleep amidst the splendour?

This morning we enjoy breakfast in our cabin as the train speeds through the heart of France towards the coast. After a delicious brunch onboard, it's time for us to alight in Calais. Here a plush coach carries us through the Channel Tunnel to Folkstone. Our luxury train experience continues as we board the restored carriages of the lavish Belmond British Pullman. The train is nostalgia on wheels - the decor a reminder of the glorious days of the 'roaring 20s' with rich upholstered seats, warm hues, and wooden frescoed walls. Each of the train's carriages has its own unique history, one of them being favoured by the Queen Mother and another, Cygnus, used for Winston Churchill's funeral in 1965. Passionate chefs and the resident pianist transport us to the golden age of train travel, and we are offered an escape from the humdrum of the modern era. Our journey takes us through landscapes that are quintessentially British as we enjoy afternoon tea on board, accompanied by a glass of sparkling English wine. We disembark at London Victoria and our holiday comes to an end.