Experience the beauty of the Dordogne

You will meet your Tour Manager at our dedicated Departure Office at St Pancras International before you travel on the Eurostar service to Paris. Here you connect with the train to Brive for a transfer to Le Bugue, a small and attractive market town that sits on the Vézère River. The town remains mostly untouched by the throng of tourism, so walking around is a delight. Enjoy the laid back pace of life the locals are accustomed to during your time in this historic town, which is spent at the Hotel Royal Vézère.

Take to the water at La Roque-Gageac today for a traditional flat-bottomed Gabare boat cruise. Sail serenely along the river and watch in awe as high, rocky hills elevate dramatically behind elegant houses which are beautifully framed by verdant scenery. This is the essence of the Dordogne region and your chance to experience the true charm of the Dordogne countryside as you gently cruise down river. Next you'll make a visit to the hanging gardens of Marqueyssac, a 300 year old topiary garden conceived by the landscape designer who worked on Versailles' show-stopping gardens. Here you can explore wander through intricate, hand-shaped mazes made up of over 150,000 boxwood trees.

This morning is free to explore the charming town of Le Bugue. You have the opportunity to admire the town's traditional houses and take a stroll along the river.

Your excursion today starts in Sarlat, an incredibly picturesque town in the heart of the Dordogne. The medieval Old Town, with its labyrinth of alleyways and buildings built in warm honey-coloured stone, is virtually unchanged since the Middle Ages. Developed around an ancient Benedictine monastery, Sarlat is a favourite location for film directors as modernity has largely excluded the area from its grasp which leaves it as one of the most representative towns of 14th century France.

Enjoy a stroll, perhaps visiting the Cathedrale Saint Sacerdos, a pretty cathedral that is one of the National Monuments of France. The cathedral's belfry dates back as far as the 9th century, though a whole range of architecture is on display, thanks to extensive redevelopments in the 16th and 18th centuries. Today is also market day, giving you the chance to peruse the stalls for fresh produce and local crafts.

Continue this afternoon with a visit to the Lascaux II, a carefully-constructed replica of the off-limits World Heritage listed Lascaux cave system in the Vézère Valley. Discovered in 1940, the original caves are home to a collection of fascinating palaeolithic cave paintings, believed to date back almost 20,000 years and depicting creatures that roamed the landscape here all those years ago. As the original caves are closed to the public, Lascaux II was created to provide an authentic experience, without risking damage to the ancient caves. Afterwards, continue to Les Eyzies-de- Tayac-Sireuil this afternoon where entrance is included to the National Museum of Pre-History. Here you can wander through exhibits that tell the story of how life here as we know it originated.

This morning you travel to the magnificent village of Rocamadour, perched high above the meandering river below. The town rises up in levels, and is crowned by l'Hospitalet Abbey. Perched on the side of a rocky hill this town overlooks the countryside with sweeping views and is a focal point of the region due to its pretty towered skyline. In the afternoon you continue to the medieval village of Martel, an attractive place that is steeped in history.

We take a ride on the restored Truffadou Steam Train which hugs the side of the hills as it travels around the valley, a great way to adsorb the views over the stunning Dordogne valley. The rail line was built to carry timber to Bordeaux, for the production of wine casks, though its current name comes from its later use as a method of truffle transportation from the market of nearby Martel. Whilst previously timber would have been carried slowly on Gabare boats, the introduction of the train line shortened the process considerably, creating considerable competition for trade with the Gabare river boats.

The railway was built in the 1880s and opened for traffic in 1889, though it was later dismantled in 1917 by American soldiers to help the First World War effort. Rebuilt the following year - also with the help of American soldiers - the rail operated in this commercial capacity until 1980. Thanks to railway enthusiasts, the line was reopened as a tourist attraction in 1997, and is now run entirely by volunteers. 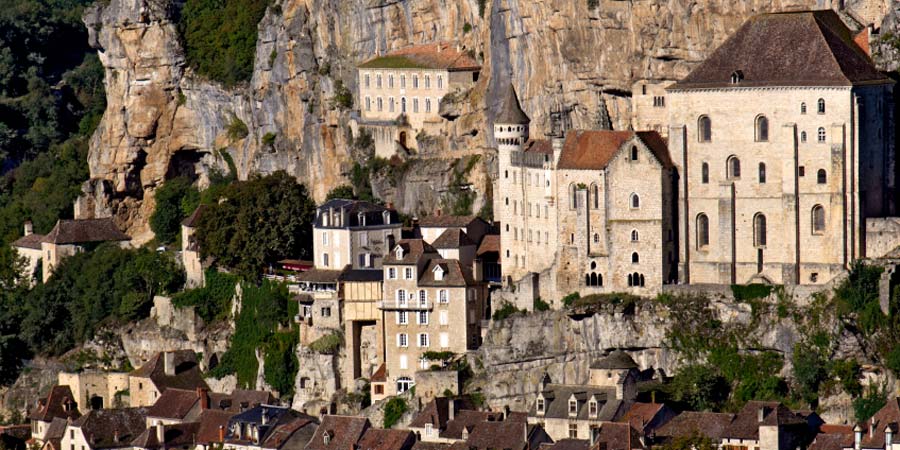 Transfer by coach to Brive today, for the train to Paris. Here, you change for the Eurostar to St Pancras International, where your tour concludes.

Please Note: For departure 18DQS03 you will now travel to Bordeaux where you catch the train to Paris.