Two countries with an intertwined history

Sorry this tour is no longer available.

We meet at London Gatwick for our flight to Helsinki, the world's second most northerly capital after Reykjavik. From the airport we are driven to our hotel for the next two nights, the 4-Star Crowne Plaza. After time to settle in, we enjoy a 'welcome to Helsinki' dinner at restaurant Zetor, which specialises in appetising Finnish cuisine. 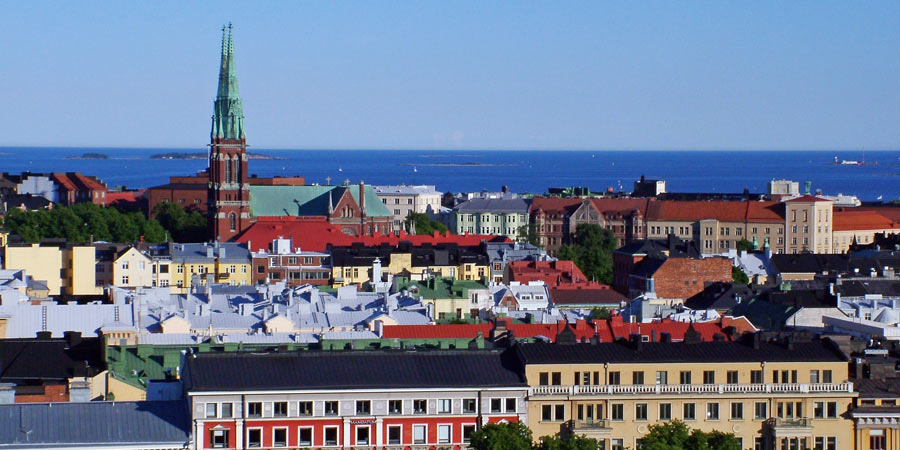 Today we set out into the city with a local guide for a coach tour of stylish Helsinki. Surrounded by a beautiful archipelago of hundreds of tiny islands, nature is also in abundance on the mainland, with many public parks and open spaces. At the forefront of cutting-edge urban design, Helsinki is an eclectic mix of old and new, with hip galleries and bars dedicated to craft beers. But it hasn't forgotten its 450 year past, with its art-nouveau buildings, art-deco inspired café culture and monuments to its talented citizens.

One such example we see today; having just celebrated the 150th anniversary of his birth, Finland's most famous composer, Sibelius, is celebrated in abstract style in Sibelius Park. We also visit the Töölö neighbourhood of the city, where lies the unusual Temppeliaukio Church.

Also known as the 'Rock Church', this Lutheran place of worship has been carved out of pure bedrock, giving it excellent acoustics. We also stop at a number of other landmarks, including Helsinki Cathedral and Market Square.

Following breakfast this morning, we transfer by coach to the station where we catch the train to Lappeenranta, a town on the shores of Lake Saimaa and just 19 miles from the Russian border. We check in to the 4-Star Holiday Club Saimaa on our arrival, our base for the next two nights. 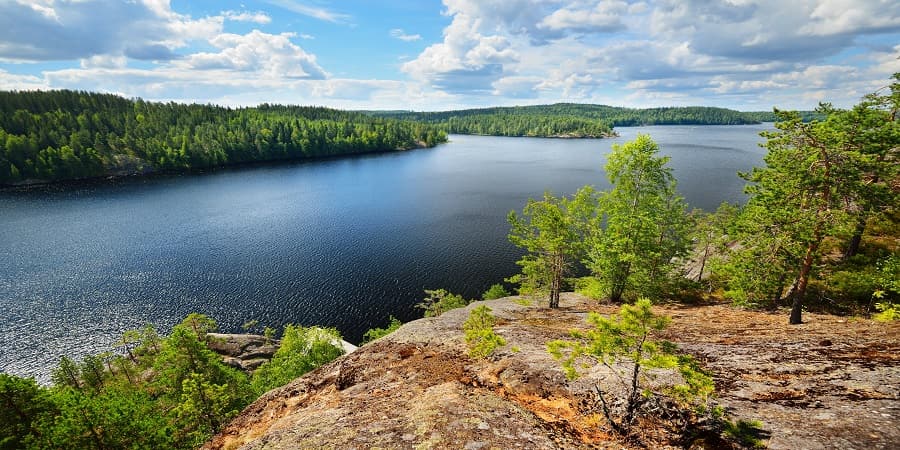 Days 4-5 - Lappeenranta and the Saimaa Canal

Our excursion today helps us dig under the surface of Lappeenranta's fascinating history, from its 17th century market place, to the 18th century occupation by Swedish then Russian forces. The city was reunited with its countrymen in 1811 when it became once again, a part of Finland. Thereafter followed a period of peace until the Second World War, when Lappeentanta was bombed heavily by the soviets. The Salpalinja Defence Line and its museum shows how one infantry company held the line from 1940-1944. Following lunch at a local restaurant, we are lucky enough to hear an expert talk back at the hotel on the history of Finland and Russia, as well as the importance of the Saimaa Canal.

We make our journey into Russia in style on Day 5, cruising to Vyborg along the same canal we learnt about last night. Continuing by coach, we enter in the city of St Petersburg for three nights.

Please Note: For departure FPJ1801  you will stay at the Hotel Angleterre in St Petersberg. 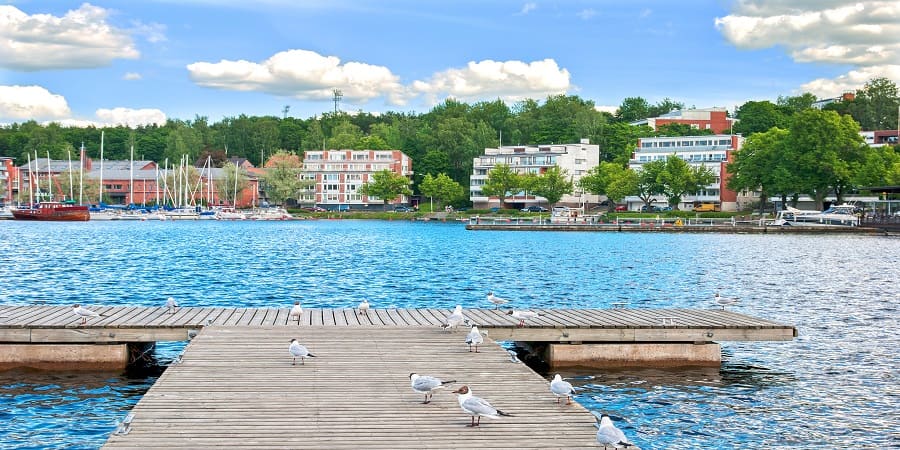 One of Russia's largest and best-loved cities, St Petersburg was surprisingly only developed about 300 years ago. The area was uninhabited until the early 18th century, when Peter the Great ordered the construction of a defensive garrison to reduce the threat of Swedish attack. On the completion of the St Peter and St Paul fortress, the Tsar decided to relocate the capital here, building it with almost an unlimited supply of money. The latter half of the 18th century saw Catherine the Great come to the throne, and the city flourished further during her reign as she was a great patron of architecture and the arts - Pushkin and Dostoyevsky's work came to the fore in this time. However, this was in great contrast to much of the rest of Russia, and after the successful 1917 Revolution Lenin moved the capital back to Moscow. St Petersburg was renamed Leningrad, and the city was largely neglected. Ironically, this did much to preserve it; the city generally missed out on Soviet buildings and street planning, though its citizens suffered greatly during the seige of 1941-1944. When communism fell in 1991, St Petersburg regained its name, and its wonderful historic centre was declared a UNESCO World Heritage site.

Today the former swamp has blossomed into a magnificent city; with its grand boulevards, open squares and network of canals, it is a delight to explore, boasting a wealth of historic monuments and celebrated cultural attractions. We enjoy a guided tour of the city's main sights, beginning with a journey by hydrofoil across the Gulf of Finland to Peterhof Palace.

Sometimes referred to as a 'Russian Versailles', the opulent complex is UNESCO listed and renowned for its beautiful grounds, filled with spectacular fountains and waterways. The string of glittering palaces were constructed by Peter the Great with no expense spared, and as such they display some of the finest and most lavish artworks and ornaments that the world has to off er, whilst the impressive gardens stretch out almost all the way to the sea shore.

Next we take a break for lunch, stopping at a local restaurant before continuing our sightseeing this afternoon with visits to key landmarks including St Isaac's Cathedral, Nevsky Prospect and the ostentatious, wedding cake creation of the Spilt Blood Church - instantly recognisable with its multi-coloured domes. We return to our hotel in order to prepare for one of the highlights of our tour, a night out at the ballet. Renowned as the Ballet Capital of the World, the Hermitage undoubtedly provides a theatrical experience like no other whilst being surrounded by regal Russian history. We re-visit this iconic destination on Day 7.

Founded by Catherine the Great in 1764 and set in the magnificent Royal Winter Palace, the extravagant state rooms of the Hermitage encapsulate the story of Imperial Russia and the Romanovs. At the head of one corridor is the clock stopped by Tsar Nicholas at the moment the Palace was stormed in 1917.

Tonight you are at leisure in this great city, so perhaps try some authentic Russian delicacies at one of the many restaurants available to you. 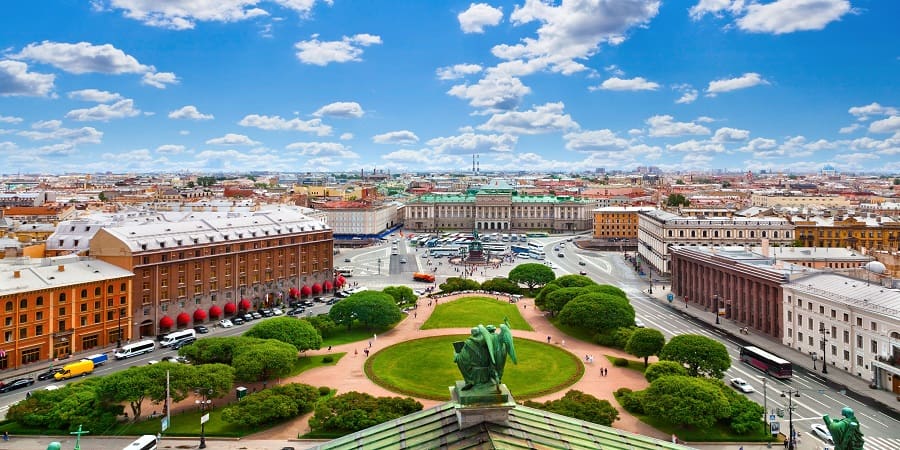 Days 8-9 - Return to London via Helsinki

Travelling back to the rail station today, we take the train to Helsinki for one last night at the Crowne Plaza Hotel. On the morning of Day 9 we transfer to the airport, flying to London where our tour concludes. 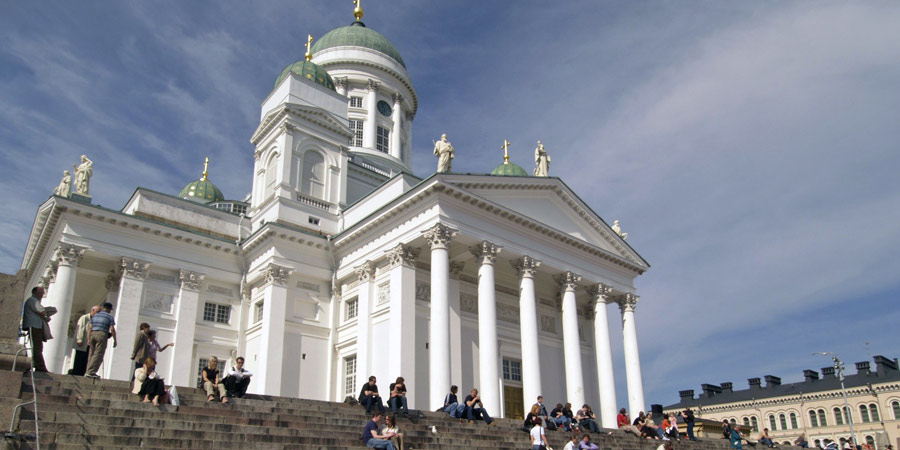