Discover the route that connected Asia to Europe

We board our overnight flight from London Heathrow to Hong Kong, arriving on Day 2. Here, we board a flight to Beijing, checking into our hotel for the next 3 nights, the Novotel Xinqiao, on arrival. After an afternoon at leisure, we enjoy a traditional Peking duck dinner at a local restaurant. 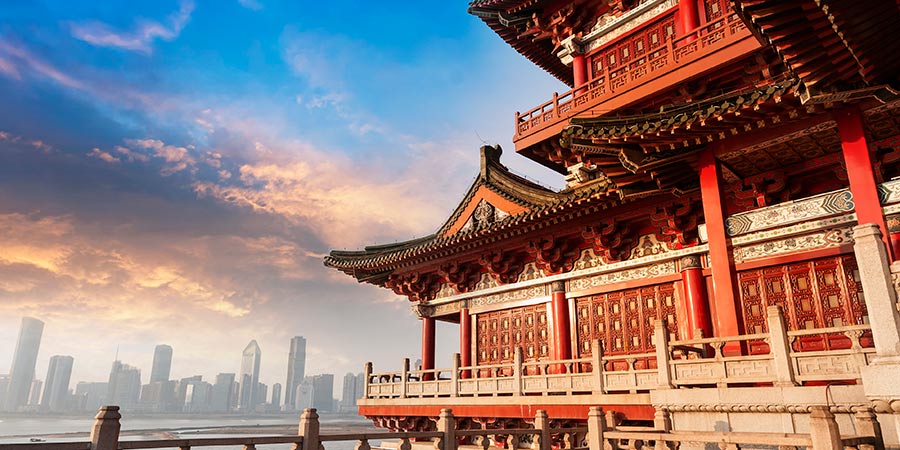 Days 3-4 - Beijing and the Great Wall

After an early morning Tai Chi session at a nearby park, we embark on a guided sightseeing tour of the futuristic capital of China. Our coach takes us to Tiananmen Square, the site of the world famous political demonstrations of 1989, before we move on to the Forbidden City, where we take a walking tour. Afterwards we visit a local tea house for an authentic tea tasting.

On Day 4, we experience a highlight of our holiday, a visit to the Great Wall, one of the new Seven Wonders of the World. We take in its thrilling history on a guided tour of the Mutianyu section, the most preserved part of this ancient structure.

Tai Chi is a form Chinese martial arts practised for its health benefits and calming effects on the mind and body. It is an ancient Chinese method of self-development and is a blend of meditative, medical, and martial knowledge. We rejuvenate ourselves with an early morning Tai Chi session at a park in Beijing. While cruising along the Yangtze River, we enjoy another session on the deck of our ship.

Days 5-6 - Xi'an and the Terracotta Warriors

We experience China by rail today, boarding our train to Xi'an this morning. Often called the birthplace of Chinese civilisation, Xi'an's history is both intriguing and enriching. It has been the capital city of 13 imperial dynasties and was the base of 'The First Emperor of China', Qin Shi Huang.

On arrival, we check into our hotel, the Grand Mercure in the heart of the city. This evening, we are treated to a dumpling banquet dinner. Xi'an has long been associated with dumpling making as the art of creating the most delicate dumplings is said to have been refined in this city.

On Day 6, we visit the site of the Terracotta Warriors. Built about 2,000 years ago to guard the tomb of Qin Shi Huang, this clay army consists of soldiers of different ranks, along with their weapons and chariots. After lunch, we explore the city walls of Xi'an including its elaborate West Gate. 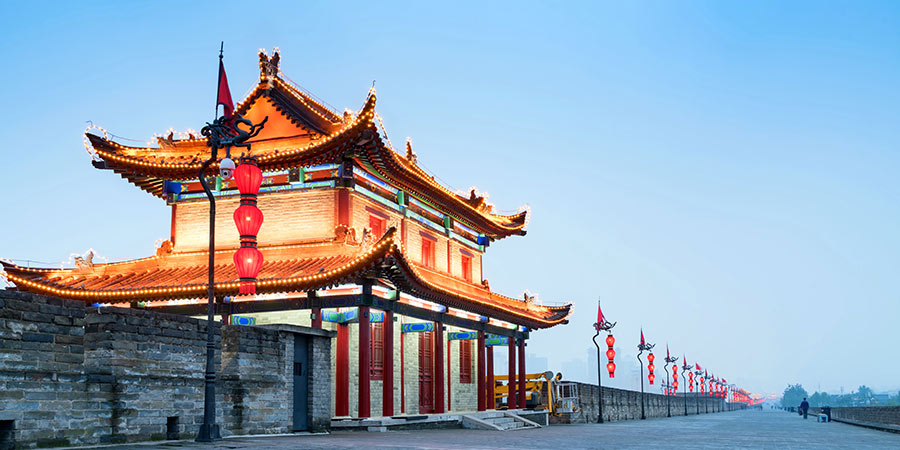 This morning, we transfer to the airport for our flight to Dunhuang, at the centre of the Silk Road network, an ancient thriving trading route connecting China to the west. The route is so named because the primary trading item was the highly coveted Chinese silk. Dunhuang is situated in an oasis close to 2 large deserts - the Taklamakan and Gobi. After checking into our Dunhuang Hotel, we take a tour of the Mingsha Shan or singing sand dunes, that emit a musical sound when the wind blows through them.

We also visit Crescent Lake which lies at the centre of these sand dunes. Our excursion on Day 8 takes us to the Mogao Caves, made up of 492 temples, famous for their statues and wall paintings that span 1,000 years of Buddhist art. In the afternoon, we transfer to Jiayuguan, our base for the night.

On Day 9, we take a tour of the 2,400-foot long Jiayuguan Pass, the first pass or gate at the western end of the Great Wall. This part of the wall is built with rammed earth and has a yellowish tinge unlike the section in Beijing that's made of bricks and stones. We visit the Jiayuguan Museum of the Great Wall which captures the various changes the wall has undergone over the centuries. Later, we take the train to Lanzhou for the night. On arrival we do an orientation tour where we see the White Pagoda park and Zhongshan Iron bridge.

The Mogao Caves in Dunhuang are also known as the Thousand Buddha Grottoes, or the Caves of the Thousand Buddhas. Located at a very strategic point along the Silk Road, they feature 492 cave sanctuaries that are full of statues and paintings representing 1,000 years of Buddhist art. Under the Tang dynasty the site was a centre for Buddhist learning, housing 18 monasteries and 1400 monks and nuns.

The Echoing Sand Mountains or Mingsha Shan in Dunhuang, stretch up to 25 miles in length. On days when the wind is strong, the sands produce a roaring sound and if a gentle breeze blows, the sands produce what sounds like musical notes. Legend has it that the sounds are the battle cries of a war fought on this site eons ago. We experience the magical dunes and the crescent-shaped lake at the centre. 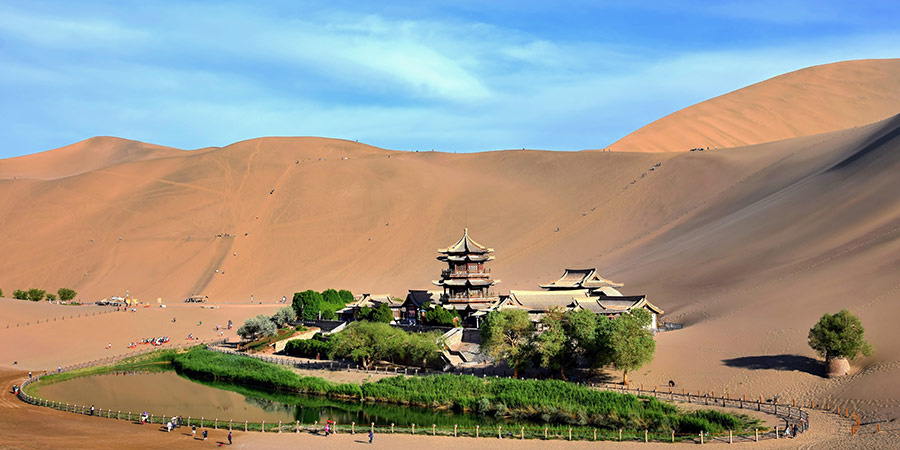 We travel by train to Chongqing this morning, where we begin our 3-day cruise along the Yangtze River.

On Day 11, we have the option of visiting Fengdu Ghost Town (payable locally), before an excursion to the Shibaozhai Pagoda, located on a hill above the river. This evening, we enjoy the captain's welcome party on board, along with cabaret performances by the crew.

Day 12 takes us on a scenic journey through the Qutang Gorge and the Wu Gorge, and we drift past soaring mountains and quaint hamlets. Afterwards, we transfer to smaller boats for an excursion to the Shennong Stream, a tributary of the Yangtze. 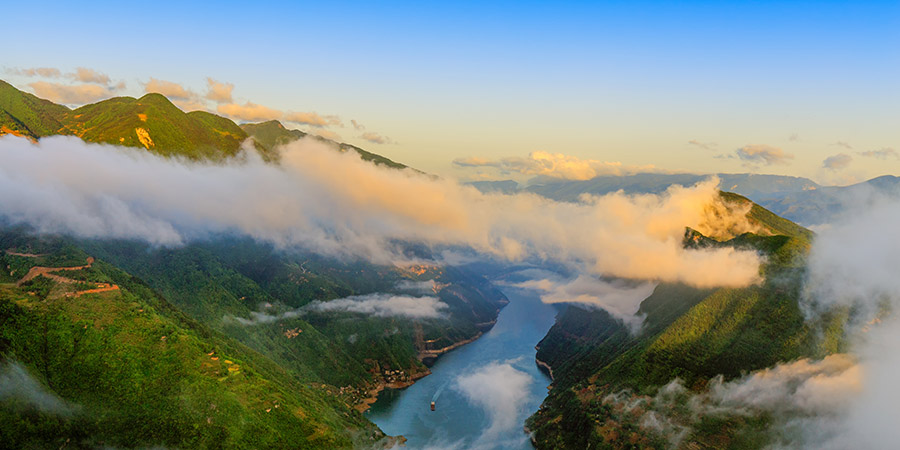 After disembarking at Maoping Pier in Yichang today, we visit the Three Gorges Dam, a hydroelectric dam that's 7,660 feet long and 607 feet high. At the time of its completion in 2006, it was the largest dam structure in the world. After lunch we transfer to the station for our train to Changsha.

On Day 14, we explore Changsha, visiting the Hunan Provincial Museum. After lunch, we board the train to Guilin, famous for its dramatic landscapes dotted with oddly-shaped limestone karst hills.

On Day 15, we enjoy a cruise along the Li River, travelling through some of the most breathtaking sceneries that China has to offer, past dome-like green hills and grassy banks to Yangshuo. Here, we explore the Xi Jie, or West Street, the oldest street in the area with a history dating back about 1,500 years. In the evening, we enjoy a cooking class, preparing traditional Chinese dishes, which we sample for dinner.

On Day 16, we transfer to the airport for our flight to London Heathrow via Hong Kong. 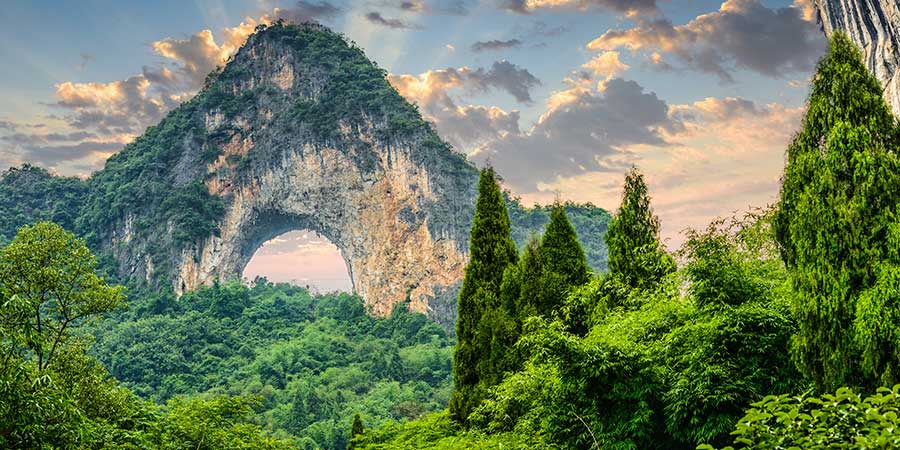