It seems almost small-minded to say it, but where does the climate crisis leave travel? Important questions now arise about how ecologically aware we are of our holiday habits and how much we are contributing to the collapse of many vital ecosystems around the world.

The ethics of travel are already complicated enough with questions of fair trade, animal welfare and cultural considerations without looking to hard at our environmental footprint.

But the simple fact of the matter is that travel does, and always will, have a serious impact on the climate and the ozone layer. It's thought that tourism and the tourism industry is responsible for about a tenth of the world's carbon footprint according the Nature Climate Change scientific journal. A particularly striking example of this is that one flight to New York and back from London has more of an impact on the climate than an entire year's worth of personal energy use - and air travel is on the rise. One only has to look at pictures and videos of the enormous cruise ships which haul themselves like sluggish leviathans into Spanish and Caribbean harbours to realise that our travel and how we see the world, needs a new approach.

Rail travel and the future

You may well look at this blog, see the website and the company that it has been written for, and think that this is some kind of plug for rail holidays. But the truth is that many people and travellers around the world are waking up to the possibility that rail travel is the short-term answer to the carbon footprint question that tourism poses.

A major player in bringing a new awareness of the climate crisis to the world is one Greta Thunberg, a 16-year-old, Swedish activist whose determination to bring the climate to the forefront of political discourse has been nothing but inspirational. Her work has spurred her fellow Swedes and millions of other people worldwide to action, taking the subject to the halls of international governments across the globe.

A reaction to her work in Sweden has seen the hashtag #stayontheground take flight as it were, which aims to raise awareness of other, more ecologically sensible modes of transport. They even have a word for it now: Flygskam which literally translates to 'flight shame'. This acknowledgement of the tourist carbon footprint has seen more Swedish travellers pick the rail option over the flight option, with the movement making its way onto the twitter and Instagram feeds of celebrities.

It's all very well to advocate rail travel as being a greener alternative to air travel - but does the science check out?

The simple answer is yes, it is.

In a study commissioned by the International Energy Agency (www.iea.org/futureofrail/), it emerged that rail travel contributed only 2% of the total energy consumed in transport, despite railways transporting 8% of freight and 7% of passengers. The below graph shows exactly how that statistic looks when compared to rail's heavy-handed, energy-guzzling cousins: 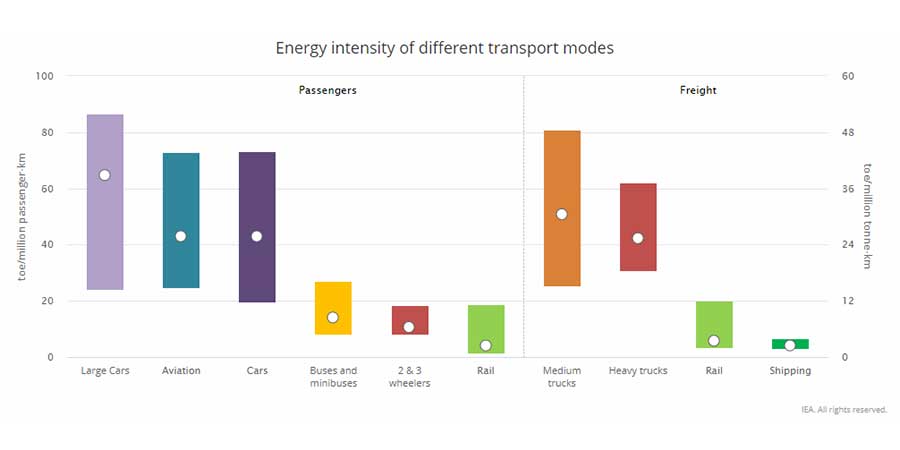 Where next for green railways

The good news for the railways is that they're naturally off to a great start with regards to green travel. With this headstart, railway networks and operators around the world can easily plough ahead with improving the sustainability of their service.

For a start, electricity. Nearly 75% of all passenger rail traffic is run on electricity which is proven to have less of a carbon footprint than diesel. And with a large number of developing countries choosing to invest in railway infrastructure such as India and Morocco, it seems as though the railways are already starting to contribute to improving the global carbon impact.

As well as that, there are a host of other ways in which railways are stepping up to become more green. Take the ticket systems for instance - with the focus of day-to-day life shifting into the digital world, paper tickets are rapidly becoming a thing of the past in favour of more environmentally-friendly e-tickets and barcodes. This sees the huge number of paper tickets printed everyday at stations across the world reduced, thereby reducing the high amount of paper waste.

Another example is the use of lighter trains across local networks for short distance travel. These trains weigh less, meaning less energy is needed to power them along the track - they become almost like the trams which are found in city centres across Europe, completing the same journeys with less of a carbon footprint.

Automatic shutdown factors also contribute to a greener train, with air conditioning and other none essential services shutting down when the train isn't in use or is at rest in a station. All of these innovations work in tandem to pull out railway travel as being on the forefront of a green travel revolution.

With the work going on behind-the-scenes in the railway world, and with the world waking up to a new and greener way of thinking, the future for rail looks brighter and cleaner than ever.