Situated on the shore of the sparkling Elliott Bay, and overlooked by the mighty Mount Rainier, Seattle enjoys a magnificent setting and boasts much to offer the visitor. The city's major development began in 1851, when a party led by Luther Collins formally claimed the land around Alki Point. After successive floods, the town relocated to what is now Pioneer Square the following year. The acres of forest surrounding Seattle were then felled as the growing lumber industry fuelled the town's growth. The Klondike Gold Rush of 1897 cemented Seattle's status as one of the USA's primary transport and commercial hubs.

Since then, more recent success stories include Boeing, Microsoft, Starbucks and Amazon.com, who all began in the city and have headquarters here. Seattle's music scene is also renowned, for its jazz and as the birthplace of grunge. As befitting a city with such a long period of prosperity, Seattle is packed with things to see and do and makes for a memorable visit during your rail tour. 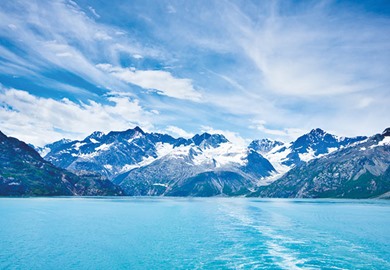 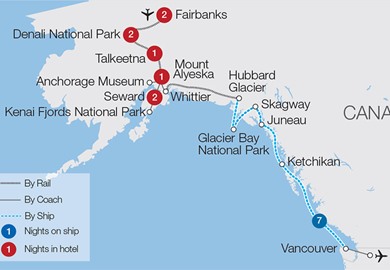 Seattle's Observation Deck was built in 1962 for the World's Fair and has come to be an international symbol of the city. The 605-feet (184-metre) structure was once the tallest building west of the Mississippi, and has been Seattle's top tourist destination since it opened.

Seattle's largest museum is partially housed in the restored 1909 hangar that was Boeing's original manufacturing plant. The museum charts the fascinating story of flight through a selection of relics and exhibits, along with some of the world's most famous planes. Aircraft on display include a 747 jumbo jet and Concorde, as well as the first presidential jet, Air Force One.

Having opened in 1907, the famous Pike Place Market is one of America's oldest continually operated farmers' markets, and is arguably Seattle's most popular attraction. Set on a sloping hill, the market occupies 13 buildings over a nine-acre site. As well as the stalls piled high with locally-grown produce, there is also a wide variety of unique shops - such as comic book and antique dealers, and the original Starbucks coffee shop - which has ensured the market's popularity to the present day.