Grand Tour of China and Tibet

Beijing to Lhasa on a stunning rail adventure

You are viewing the 2021 itinerary. Select your departure year
20212022
15 days Sold out
Flexible Booking

Book your 2021 holiday before 30th April and you can transfer your holiday for free - no questions asked. T&C's apply

Explore China and Tibet, travelling across the 'roof of the world'. Experience the Himalayas in full glory, along with heavenly lakes, gigantic glaciers, and awe-inspiring passes. Discover Chinese historical wonders and futuristic cities during this immersive 15-day holiday.

The maximum group number for this tour will be capped at 20, allowing for a more intimate, personal experience.

We depart London Heathrow on our overnight flight to Beijing, arriving on Day 2. We transfer to our base for the next 3 nights, the Novotel Xinqiao Hotel.

On Day 3 we visit Tiananmen Square, the city's political heart and home to Chairman Mao's Mausoleum. This public area was famously the site of various demonstrations in 1989, and is immortalised by the iconic Tank Man picture. Beijing is home to a number of palaces and we explore the palace complex of the Forbidden City before continuing to the Summer Palace with its sprawling gardens and the man-made Kunming Lake.

On Day 4, we visit one of the country's most famous attractions and one of the new Seven Wonders of the World, the Great Wall of China. Stretching an astonishing 5,500 miles from Shanhai Pass in the east to Jiayu Pass in the west, the Great Wall and its original foundations are over 2,300 years old and enjoy UNESCO World Heritage status. After ascending by cable cars that offer panoramic views, we enjoy the chance to walk along this architectural masterpiece. Back in Beijing, we visit the distinctive Bird's Nest and Water Cube, both venues used during the 2008 Olympic Games. Tonight we sample Beijing's signature dish, Peking duck.

Days 5-6 - Xi’an and the Terracotta Warriors

We travel by coach today to the impressive Temple of Heaven in the bustling centre of China's capital, a local and cultural hub that is a popular meeting spot for residents. Then, we take the high-speed rail service to Xi'an, the capital of Shaanxi province and located at the eastern end of the famous Silk Road. We check into the Grand Mercure hotel for 2 nights.

On Day 6, we enjoy a visit to the Terracotta Warriors. One of the greatest archaeological finds of the modern era, this army is made up of over 8,000 terracotta soldiers, as well as horses and chariots which were buried alongside the tomb of the first Emperor of China, Qin Shi Huang. We then return to Xi'an for a tour of its attractions, including the Bazaar and the Grand Mosque. In the evening, we participate in a dumpling making class and enjoy a traditional dumpling banquet afterwards.

Authentic dumplings are pivotal to Chinese cuisine and are pieces of dough stuffed with vegetables, fish, meat, fruits or even sweets. We join a dumpling making class in Xi'an, learning the art of preparing the dough and deftly wrapping them around our chosen fillings. An every-day activity in many Chinese households, we get a unique window into life amongst families in this part of the world.

We fly from Xi'an to Xining today, from where we embark on an epic overnight journey on the highest railway on earth, ascending to Tibet past glaciers, frosted peaks, and quaint Himalayan villages.

We cross the Tangula Pass early on Day 8, home to long-haired yaks. Villages here are adorned with multicoloured Buddhist prayer flags that flutter against the backdrop of the blue sky and white mountains. On reaching Lhasa, we check into our hotel for 3 nights.

Travelling Across the Roof of the World describes our journey across the Tibet Plateau, where some of the highest mountain ranges of the world, including the Himalayas, the Pamirs, the Tian Shan, and the Altai meet. We traverse this region by rail, experiencing a route that is among the highest in the world and which reveals the majestic beauty of the lofty mountains. 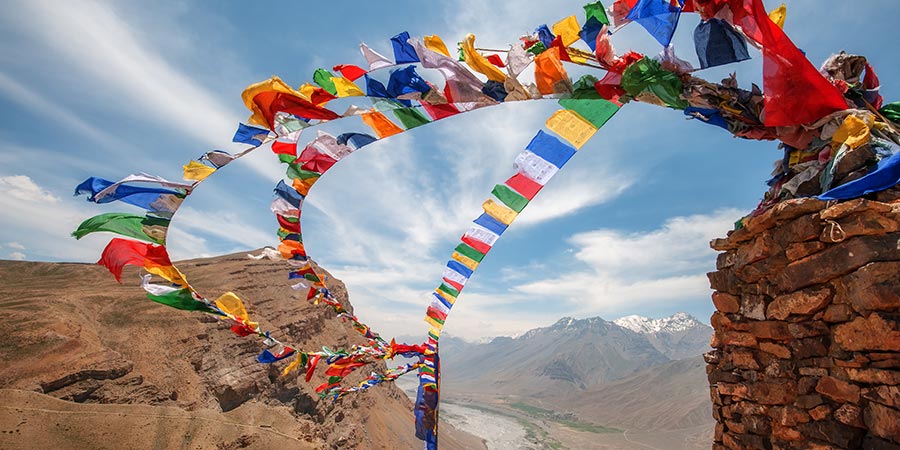 We visit the ancient Jokhang monastery today, possibly the country's most revered structure, and made up of an array of chapels decorated in glorious colours and ornate motifs. Around this structure runs Barkhor Circuit, a circuit of ancient streets. We follow the tracks of pilgrims who travel from all over the world just to walk along these streets circumnavigating the monastery. This afternoon we head towards Sera Monastery. As an educational institute, this monastery is responsible for teaching around 3,000 would-be monks from the age of 7 onwards.

We explore some of Lhasa's most famous sights on Day 10, beginning at the dazzling Potala Palace, former residence of the Dalai Lama. Norbulingka Palace, a summer palace featuring the largest gardens in Tibet, is our next destination, where we take in the majestic golden pagodas. 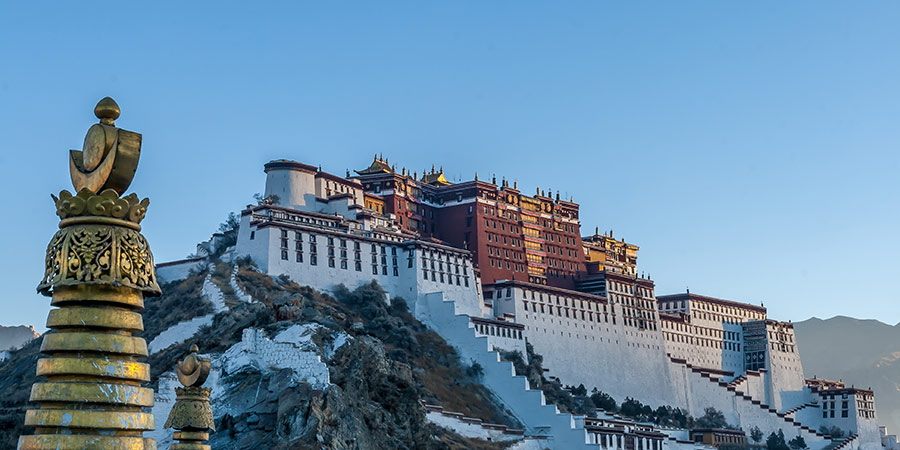 Today we leave Lhasa and travel through the mountains to Gyantse. During our trip we stop to visit Yamdrok Lake, one of the 6 sacred lakes of the country, where Buddhism has animistic traits. The tranquil water is a brilliant shade of turquoise and is fringed by snow-capped mountains. We also visit the Karola Glacier before checking into the Gyantse Hotel.

On Day 12, we visit a highlight of the region, the striking Palkhor Chode Monastery. This famous gold-domed complex has 108 chapels and one of the largest Kumbum Stupas, or multi-storeyed Buddhist chapels, in Tibet. From Palkhor Chode we continue to Shigatse, Tibet's second largest city, stopping at Tashi Lhunpo monastery on the way, which was founded by the 1st Dalai Lama in 1447.

We take a sightseeing tour of Shigatse on Day 13, visiting the Old Town, before transferring to the airport for our flight to Chengdu, back in China. 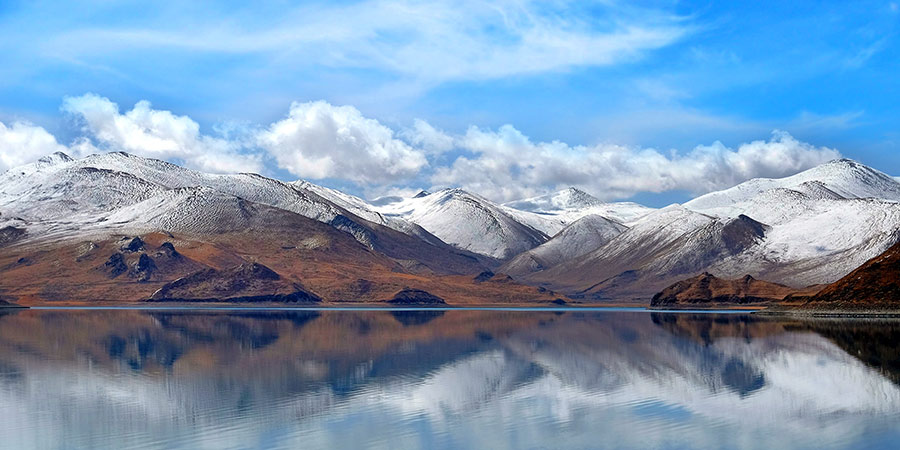 We visit the Giant Panda Breeding Research Institute on the morning of Day 14, which is home to more than 100 of these magnificent creatures, allowing us to see giant pandas at close range as they enjoy their natural habitats. After lunch at a local restaurant we take a guided tour of Chengdu, visiting the Wenshu Monastery and Jinli Street. We enjoy a farewell dinner at a local restaurant this evening.

On Day 15, we transfer to the airport for our flight back to London Heathrow.

The national animal of China is considered one of the most adorable creatures. Lazy, shy, and lonesome, they like spending most of their time either eating or sleeping. We meet them at the Chengdu Research Base of Giant Panda Breeding, where more than 120 cubs have been born since 1987. Giant Pandas can eat up to 30kg of bamboo leaves and shoots in just one day and we see them in a near-natural habitat.

Please note: This may be suitable for reduced mobility passengers, please call for further information.

The was a great experience not a lot of down time. The high altitude did hit one or two of us. I would recommend this tour for its historic and geographical interest.

Very good tour. I wasn't happy about using an internal flight from Xian to Xining (new this year) But since this seemed to enable us to take a later train from Xining and so see more of the high section in daylight, it was some compensation. According to the brochure we would have the chance to view Everest. However, the local guide told us that, in spite of the clear weather, this was absolutely impossible - too far away. Everybody was quite disappointed.The

The four stars are for the overall content of the tour and the excellent tour manager and all the local tour guides. However, the fifth star is not awarded, as no allowance was made on the day of arrival in Beijing for jetlag, as we had had little or no sleep on the overnight flight, or for the delayed Hong Kong to Beijing connecting flight. Interestingly, the departure lounge in Hong Kong was directly overlooked by the airport hotel, and I'm sure I was not alone in looking at it longingly! We thus began the tour feeling extremely tired, with no chance to "sleep it off" until we returned home afterwards!