The Grand Canyon Railway Hotel in Williams is conveniently located for the heritage railway and the Williams Depot. Owned and operated by the Grand Canyon Railway, the hotel was built in 1995 and is designed to look like the century-old train depot that once housed the historic Fray Marcos Hotel. The hotel's bar, Spenser's Pub, serves drinks as well as a selection of light meals and snacks and there is an indoor pool and a hot tub. The standard rooms feature two queen beds, telephone, television and a coffee maker. 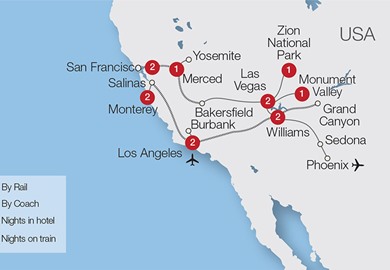 Grand Tour of Arizona, Las Vegas and The Golden West
Mr F Reader
“A very well-planned holiday taking in all the must-see sites yet allowing time for our own activities. An enjoyable group of people, good weather, and an excellent tour manager!